A new effort aimed at removing 500 shipping containers from the Ever Forward begins Saturday. The ship has been stuck in the Chesapeake Bay since March 13.
Listen now to WTOP News WTOP.com | Alexa | Google Home | WTOP App | 103.5 FM
(1/4) 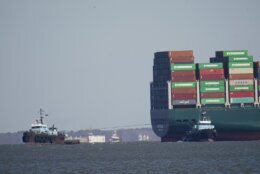 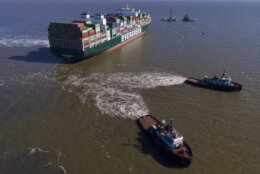 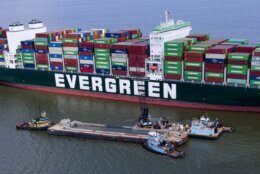 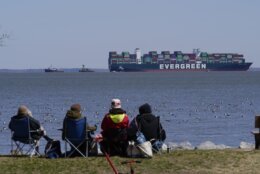 A new effort aimed at removing 500 shipping containers from a stranded cargo ship in the Chesapeake Bay begins Saturday.

The 1,000-foot Ever Forward has been stuck in the Chesapeake Bay since March 13.

The latest move, which is expected to take several days, according to the U.S. Coast Guard, comes after two failed attempts to get the massive container ship unstuck.

Officials had initially hoped to refloat the cargo ship with tug boats and pulling barges without having to remove the nearly 5,000 containers of dry goods, but that proved impossible.

Now, the plan is to remove the containers from both sides of the ship near Pasadena, Maryland, before being placed onto barges and transported to Baltimore’s Seagirt Marine Terminal.

Once the ship is freed from the Bay floor, the U.S. Coast Guard told WTOP it will likely be towed to Baltimore to verify its seaworthiness before being allowed to sail again.

The cargo ship, a sister ship to the Ever Given, which blocked the Suez Canal for several days in 2021, ran aground in shallow waters in the Chesapeake Bay, becoming lodged in the muddy floor of the bay as it was traveling from the Port of Baltimore to Norfolk, Virginia.

Unlike the Ever Given, which snarled the international supply chain and drew international media attention, the cargo ship in the Bay is not impeding any navigation, and the shipping channel is open to one-way traffic.

A 500-yard “safety zone” will be set up around the Ever Forward for the duration of the process.

The Coast Guard is still investigating what led the ship to run aground.

WTOP’s  Jack Moore and Matt Small contributed to this report.