Md. scientists: Blue crabs have double the chromosomes of humans

Those blue crabs eaten at a picnic table in the summer from the Chesapeake Bay had a long mystery behind them. Now, local scientists have cracked the code and know the makeup of their DNA.
Listen now to WTOP News WTOP.com | Alexa | Google Home | WTOP App | 103.5 FM
(1/3) 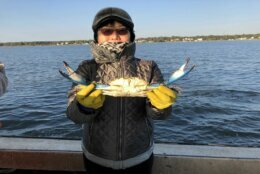 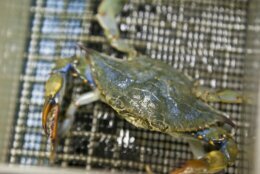 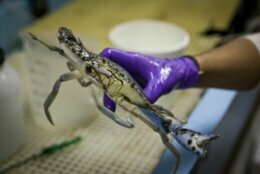 Those blue crabs eaten at a picnic table in the summer from the Chesapeake Bay had a long mystery behind them. Now, local scientists have cracked the code and know the makeup of their DNA.

It was unknown until now that the blue crab has between 40 and 50 chromosomes, nearly double the number found in humans.

“We did it first in the blue crab,” said Sook Chung, a professor at the University of Maryland Center for Environmental Science who led the project at the Institute of Marine and Environmental Technology in Baltimore. “So that part, I really take pride in it.”

She added, “It’s a lot of chromosomes.”

Even though blue crabs have more chromosomes than humans, theirs are much smaller.

Chung said the chromosomes are actually very short, which means that the blue crab genome is about a third of the length of the human genome in terms of bases.

Since the genome within a species varies by individual crab, Chung said, they had to pick the right one.

In October 2018, Chung went out on the Chesapeake Bay on a crabber’s boat and collected dozens of young female blue crabs, which were then bred in IMET’s Aquaculture Research Center.

Tsvetan Bachvaroff, an associate research professor with the program, was responsible for assembling the blue crab genome.

One of the females Chung collected grew to adulthood, mated and successfully produced offspring, proving she had good genes for reproducing. That crab’s daughter was selected for sequencing and dubbed “The Chosen One.”

Scientists isolated the DNA from The Chosen One and sent it off to be sequenced, a process that took a special computer running day and night for more than six months.

In total, the project took more than six years and resulted in a published research article.

Most of the money for the project came from crowdfunding among Maryland residents — about $200,000 in donations. The rest came from a Maryland Sea grant from the National Science Foundation.

“Maryland citizens supported this project that is just — you know, it’s unheard of.”

Next, Chung said, researchers will determine the exact number of chromosomes through microscopic work.