Maryland’s offshore wind economy is developing at an accelerated pace. The latest evidence was an announcement from one of two companies that are expected to build wind energy projects off the coast of Ocean City had reached a $70 million agreement with a steel company in Federalsburg to fabricate steel for turbine components.
Listen now to WTOP News WTOP.com | Alexa | Google Home | WTOP App | 103.5 FM

Maryland’s offshore wind economy is developing at an accelerated pace.

The latest evidence was an announcement Thursday that Ørsted Offshore North America, one of two companies that are expected to build wind energy projects off the coast of Ocean City, reached a $70 million agreement with a steel company in Federalsburg to fabricate steel for turbine components.

The components would be used on turbines for Ørsted’s proposed Skipjack wind development, which is likely to be built off Ocean City, and for two of the company’s projects off the New Jersey coast. They would also be used for a proposed second wind energy development off the coast of Maryland, which is currently being vetted by the state Public Service Commission.

Gov. Lawrence J. Hogan Jr. (R) and a host of other state and local officials, business leaders and environmental groups, were on hand for the announcement at the Crystal Steel Fabricators Inc. plant in an industrial park near Marshyhope Creek in Federalsburg. Hogan called it “an exciting day.”

“Ørsted is a cutting-edge company that has made it their mission to create a world that runs on green energy, and they are progressing toward that goal by continuing to invest in Maryland,” he said. “I am confident our state will continue to be a prime location for offshore wind development, and I want to thank both Ørsted and Crystal Steel for playing a key role.”

This is just the latest announcement about Maryland businesses that are poised to benefit from the fledgling offshore wind industry. Earlier this month, Ørsted announced that it would build a $20 million emissions-free offshore wind operations and maintenance facility on Harbor Road in West Ocean City. And in August, the second company to gain state approval to build a wind energy development in federal waters off Ocean City, US Wind, made a splashy announcement that it would expand operations in Maryland and open its own steel plant at the Tradepoint Atlantic industrial development in Baltimore County.

The Tradepoint Atlantic blueprint, to a great degree, depends on US Wind’s expansion plans being approved by local, state and federal regulators — a process that could take years. In an act of subtle gamesmanship, Ørsted executives boast that their project in Federalsburg can begin immediately, and in fact, Hogan and his Commerce secretary, Kelly M. Schulz, both joked Thursday that they would try to exit the plant quickly so as not to impede progress.

The agreement signed between Ørsted and Crystal Steel means the steel company will be able to hire up to 50 new workers — machine operators, welders and steel fitters — which would increase its workforce in Federalsburg by about one-third and pay “substantial wages,” according to William Lo, president and CEO of the minority-owned company. 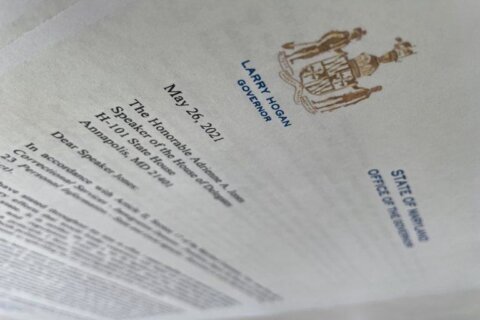