Quantum computing has developed into what could be the next technological revolution. One local company, College Park-based IonQ Inc., could play a key role.
Listen now to WTOP News WTOP.com | Alexa | Google Home | WTOP App | 103.5 FM
(1/4) 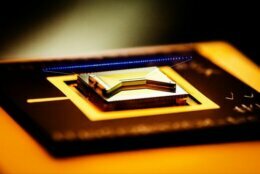 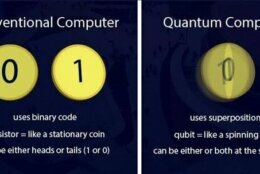 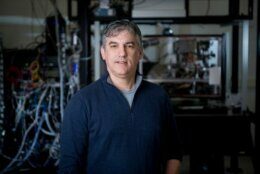 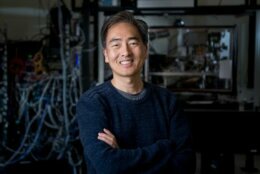 Over the past few decades, quantum computing has developed from what many considered a science-fiction fantasy into what could be the next technological revolution. One local company, College Park-based IonQ Inc., could play a key role.

In what some are calling the “quantum space race,” governments around the globe are funding quantum computing research in an effort to become the world’s leading innovator. China spends about $2.5 billion on quantum research annually, more than 10 times what the U.S. spends, according to a report in The Wall Street Journal.

The quantum competition, reminiscent of the U.S.-Soviet era Sputnik space race, is expected to heat up under the Biden Administration, which plans to commit $180 billion to research and development and “industries of the future,” including quantum computing. That spending could provide a boost for IonQ, which was founded just six years ago.

“Both Congress and the president have made clear they plan to invest in the research, technology and talent needed to keep the United States in the global vanguard of innovation,” said Kara Sibbern, a IonQ spokesperson. “At IonQ, we will be working with policymakers to support this effort however we can.”

But whether new companies such as IonQ can compete in the brave new world of quantum computing is unclear. IonQ will be up against many U.S. and international companies, including heavy hitters like Google, Microsoft and IBM Corp.

Investors on Wall Street are closely watching the young company. In March, IonQ filed with the Securities and Exchange Commission to go public on the New York Stock Exchange by merging with dMY Technology Group Inc. III, a special-purpose acquisition company, or SPAC, based in Nevada. The deal is valued at about $2 billion. If the SEC approves the transaction, IonQ would be the first company in the U.S. focused specifically on quantum computing to go public.

Like many other companies that use SPACs to raise capital, IonQ is hoping that merging with an acquisition company will allow it to raise capital faster than by using a traditional initial public offering. Merging with dMY “affords us greater speed to market, flexibility and ability to focus on business execution,” said Sibbern. The deal is expected to be completed this year, but the company couldn’t provide an exact date.

The stock offering marks a huge step for a computing technology that not long ago was widely thought to have little promise beyond the theoretical.

Quantum computers use the power of quantum physics to quickly solve problems and perform tasks faster than a conventional computer. The technology could speed up calculations related to finance, drug development, materials discovery, artificial intelligence and others.

Quantum computers function differently from conventional computers, which accounts for their speed. Conventional computers use a large number of tiny transistors, which represent information as either a “1” or a “0.” Quantum computers differ in that they use qubits, which can represent and work with both numbers simultaneously. This is due to what’s known as superpositioning.
To understand the principle of quantum superpositioning, it is often compared to a coin. Think of a single, stationary coin sitting on a table. It will be in only one of two states: heads or tails. Similarly, a transistor can only be either “0” or “1.” But if you spin the coin, you can say it’s both heads and tails at the same time until the moment you stop it and see what it lands on. This is like a qubit. Until you measure it as a “0” or “1,” it can exist in several different states at the same time.

So far, quantum computing is still in the research phase, far from widespread commercial use. IBM unveiled its first commercial quantum computer in 2019, IBM Q System One, but the device is not for sale. Rather, it’s a cloud-based product that customers can access over the internet to perform calculations.

However, executives at IonQ and other companies believe the industry is close to developing scalable products that can serve business needs.

“We believe quantum computing will power the next technological revolution for humankind and that the dawn of the quantum age is here,” said Chris Monroe, who co-founded IonQ and serves as the company’s chief scientist. “Like the information age, quantum is expected to have far-reaching impacts across every facet of our society.”

According to Monroe, any corporation with an optimization problem can yield results from quantum computing. “We’re seeing exciting advances in artificial intelligence by applying quantum to machine learning,” which can lead to even greater results, he said.

Important hurdles still exist for quantum. Eddy Zervigon, CEO of Quantum Xchange, a quantum-focused cybersecurity company in Bethesda said that while quantum computers can potentially lead to significant advancements, their speed and power could make it easier for hackers to break into the systems because current encryption methods won’t be able to keep up.

This critical point in quantum computing is known as “Q-Day”, or the day in which quantum computers can render current encryption methods useless. “No one is questioning if, but when” this day will come, said Zervigon. Quantum Xchange, recently named one of the 20 most promising startups by Technical.ly DC, is dedicated to preparing companies and organizations for Q-Day by offering quantum-safe data protection.

The two previously spent more than two decades combined researching quantum physics and engineering. Monroe and Kim would later combine their efforts to publish a scientific paper, “Scaling the Ion Trap Quantum Processor,” which was published in 2013, and detailed how to build and scale a programmable quantum computer. The paper was noticed by Harry Weller, a venture capitalist with the Maryland-based New Enterprise Association, which provided IonQ with $2 million in seed money.

Between 2015 and 2018, IonQ raised an additional $20 million in funding from Google Ventures, Amazon Web Services and NEA. IonQ would later raise more than $55 million from investors such as Samsung Group, Lockheed Martin Corp. and others.

If IonQ succeeds, it could foster growth of other quantum computing and related companies in Maryland and the Washington area and “drive billions of dollars of economic improvement over the next decade” in the region, said Monroe.

He added that the University of Maryland’s support is contributing to the industry’s growth. In 2020, IonQ opened a new Quantum Data Center, a 23,000-square-foot center in Maryland’s Discovery District. The site was made possible in part due to a $5.5 million investment from the university.

Charles Winthrop Clark, a fellow at the National Institute of Standards and Technology and the Joint Quantum Institute, offered a more measured but still optimistic view of quantum computing’s potential in the region. He notes that while a quantum industry won’t do for the Washington metro region what the digital revolution did for Silicon Valley, “there will be a lively quantum ecosystem in the DMV.”