Maryland announced its plan to speed up work on the Chesapeake Bay Bridge, and it affects tolling and Thanksgiving holiday travel. Here's what you need to know.
Listen now to WTOP News WTOP.com | Alexa | Google Home | WTOP App | 103.5 FM

Maryland announced its plan to speed up work on the Chesapeake Bay Bridge, and it will affect tolling and Thanksgiving holiday travel. Here’s what you need to know.

The Maryland Department of Transportation (MDTA) said it is moving forward with steps to shorten the duration of the Chesapeake Bay Bridge rehabilitation project in response to Gov. Larry Hogan’s directive to expedite it.

At a meeting with the Board of Public Works on Oct. 16, Hogan said not taking action was “not an option,” and demanded that experts “look at every possible solution that is feasible.”

One step the department of transportation will take is to work day and night shifts, seven days a week, including during the week of Thanksgiving.

Transportation engineers said crews will not only gain a week to work on the project, they also will not have to stop work in order to prepare the right lane for traffic. That means that the right lane of the westbound span will remain closed during the Thanksgiving travel period.

Drivers should expect major delays in both directions during the holiday, a transportation department news release said. Wednesday through Friday of Thanksgiving week are expected to be heaviest eastbound, while drivers can expect heavy westbound traffic Thursday through Sunday.

Two-way traffic operations will be reserved for emergencies and during severe backups only, the transportation department said.

Cashless tolling is currently in effect Thursdays and Fridays from noon to 10 p.m. However, moving forward, it will end at 8 p.m. to let crews implement two-way operations on the eastbound span earlier and close the westbound span for overnight work.

The department of transportation said it is developing an “aggressive timeline” to implement all-cashless tolling. This will involve the demolition of some tollbooths to create wider lanes, the installation of tolling gantries, the demolition of the toll plaza and reconstruction of the roadway.

MDTA said that it is looking into different methods and materials that could hasten the project, as well.

In addition, the department of transportation is working with the state’s tourism office to encourage travelers to the Eastern Shore to “Go Early, Stay Late.”

The tourism office’s “Home for the Holidays” initiative includes hotel packages and discounts in the Eastern Shore area, as well as promotions and incentives during off-peak times, Maryland Commerce Secretary Kelly M. Schulz said in a statement.

Crews are replacing the Chesapeake Bay Bridge’s deck surface in the right lane of the westbound span. The $27 million project will replace the road surface, make other repairs and replace the current lane-use signals.

Work began in late September, causing major delays during its first week, with travelers stuck eastbound on U.S. Route 50 for miles and for hours. The congestion was so severe that Maryland Transportation Secretary Pete Rahn ordered the suspension of toll payments to alleviate the traffic tie-ups.

State Comptroller Peter Franchot called on the department of transportation to press the pause button on the work in response to the gridlock.

‘There is no plan’: Md. comptroller calls for temporary halt on Bay Bridge work 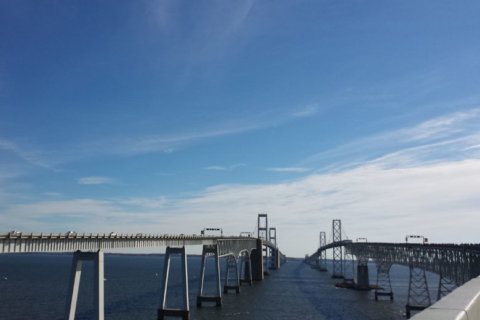 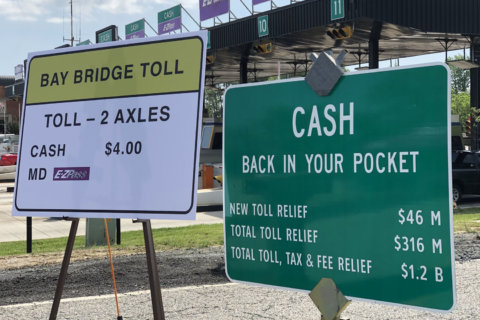