It's not just the same old rides and fried foods at the Maryland State Fair. This year, you might encounter a 9-foot robot.
Listen now to WTOP News WTOP.com | Alexa | Google Home | WTOP App | 103.5 FM

It’s not just the same old rides and fried foods at the Maryland State Fair. This year, you might encounter a 9-foot robot.

“He has a monster truck … he lights up,” and children can take pictures with the robot for free, he said.

On the Midway, a new ride called Space Port goes really high up in the air and “does a lot of neat things,” Cashman said.

There also is a new tea cup ride and a new train that’s “nice and new.”

Need more excitement than rides and robots? How about racing? The fair has seven days of thoroughbred horse racing.

For those really into the agricultural aspect of fairs, there is an educational piece on hay, alfalfa and clover that cattle and sheep eat.

“It’s used for roughage,” Cashman said. Something else new this year is an exhibit on sheep cheese.

With all the new things happening, make sure to carve out some time to visit the birthing center, It’s something, “You don’t want to miss,” Cashman said.

He said that cows having calves, pigs having piglets and chicks hatching are highlights for a lot of people.

And what’s a fair without deep-fried foods and something you can eat on a stick? The classic corn dogs and fried dough are there, but there’s also pork sundaes. That’s pork barbecue, mashed potatoes, coleslaw and a cherry tomato on top.

“It looks like a little sundae but it’s made of pork,” Cashman said.

In the Maryland Foods Pavilion you can enjoy a crab patty, symbolic of the state’s iconic crab. Need more seafood? New this year is a raw bar with oysters and steamed shrimp.

General admission tickets to the fair are $10 for adults, $8 for senior citizens, $5 for kids who are 6 to 11 and free for children under 5. Rides will cost extra, but you can get discounts and some days there are unlimited ride wristbands that can be purchased.

These are just some of the things you can see at the fair. For a complete list of attractions and entertainment, visit the Maryland State Fair’s website.

Cashman suggests that people get there early, especially if you want to get a parking space right on the fairgrounds. Parking at the fairgrounds will cost $10. No worries if you get there late, there are spaces for some 350 cars behind the fair. Free parking is available a the Deereco Road Park and Ride. 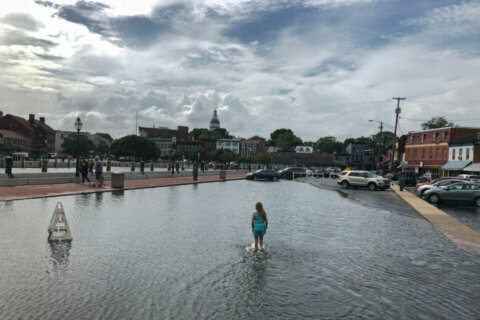