Driving over the Bay Bridge is expected to take much longer than usual for a large part of the next two years.
Listen now to WTOP News WTOP.com | Alexa | Google Home | WTOP App | 103.5 FM

Driving over the Bay Bridge is expected to take much longer than usual for a large part of the next two years, although closures are not due to hit summer travel.

Beginning after Labor Day, the Maryland Transportation Authority (MDTA) plans significant closures of the right lane of the westbound span of the Bay Bridge on weekdays, with the closure lifted on Fridays.

Then, from Oct. 1 through April 16, 2020, the right lane will be closed round-the-clock, with the exception of the Thanksgiving holiday weekend.

During the closures, there will be no two-way operations at the Bay Bridge due to narrowed lanes, which means the MDTA expects major delays in both directions, even with the closures set for the offseason of Eastern Shore tourism.

The lane is scheduled to be fully open during next summer’s travel season, then close again round-the-clock from fall 2020 until spring 2021 on the same schedule.

The closures are for critical $27 million concrete deck repairs on the westbound span’s right lanes.

“Even though traffic volumes are lowest at the bridge during these months, drivers should expect major delays, even during normal conditions, and especially during holidays, traffic incidents and inclement weather,” MDTA Executive Director Jim Ports said in a statement.

The work is intended to extend the life of the bridge deck by 15 to 20 years.

Crews will remove part of the bridge deck and then pour new concrete on top, which takes a significant amount of time to cure, MDTA’s John Sales said.

There is no similar immediate need for repairs on the eastbound span. 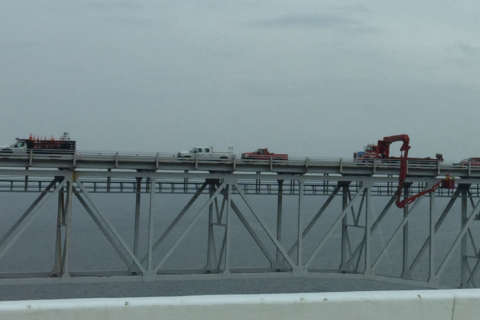 What are those workers on the Bay Bridge doing?

Where I-95 traffic is the absolute worst