Alarmed by a study that shows millennials know little about the Holocaust, a Maryland state senator is urging his colleagues in the General Assembly to pass a bill that would require that a unit on the topic be included in schools.
Listen now to WTOP News WTOP.com | Alexa | Google Home | WTOP App | 103.5 FM

WASHINGTON — Alarmed by a study that shows 4 in 10 millennials know little about the Holocaust, Maryland state Sen. Ben Kramer is urging his colleagues in the Maryland General Assembly to pass a bill that would require that a unit on the topic be included in schools.

Kramer cited statistics from a 2018 study commissioned by the Conference on Jewish Material Claims Against Germany. “A full one-fifth of millennials have not even heard of the Holocaust,” Kramer said in explaining why he is working to pass Senate Bill 416.

Kramer also told a committee in Annapolis, “Hate crimes and intolerance have been increasing dramatically over the past few years, both nationally and here in Maryland.”

He also mentioned the mass shooting that targeted a Pittsburgh synagogue as an example of the dangers of anti-Semitism.

The bill would require that starting in middle school, “age-appropriate” education on the topic be included in middle and high schools.

Two Holocaust survivors joined Kramer to testify in favor of the bill.

Irma Pretsfelder, who was born in 1926, recalled Kristallnacht, the night in November 1938 when violent anti-Jewish demonstrations broke out across Germany.

“My synagogue was on fire. I was only 11 years old. I think I turned into stone, because I couldn’t move. I didn’t really know what was going on,” Pretsfelder said.

Martha Weiman said she was born in a German village on the Dutch border, and recalled, “When the Nazis boycotted our store, we were forced to leave.”

Weiman described how her family came to the United States, and added that she spoke to schoolchildren about her experiences. She supported Kramer’s bill, saying, “This act will perpetuate the teaching of the Holocaust long after we survivors are no longer here.”

Kramer said educating children about the profoundly dark chapter in human history goes beyond the specifics of the horrors of the Holocaust. “This is how we’re going to teach tolerance to future generations,” he said. 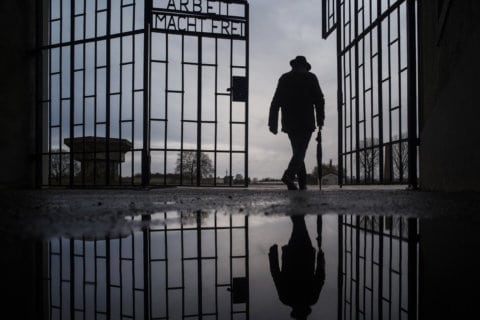 Ignorance about the Holocaust is growing