Sen. Bernie Sanders may not be endorsing his own son's congressional bid, but he rallied on a hot Monday night in Maryland to fire up voters for Ben Jealous' campaign for governor. See photos.
Listen now to WTOP News WTOP.com | Alexa | Google Home | WTOP App | 103.5 FM

SILVER SPRING, Md. (AP) — Sen. Bernie Sanders may not be endorsing his own son’s congressional bid, but he rallied on a hot Monday night in Maryland to fire up voters for Ben Jealous’ campaign for governor.

The senator, known for his reluctance to endorse politicians, joined the former NAACP president outside an early voting center in Silver Spring, Maryland.

“I am proud to be here because Ben is one of those leaders who is not going to be nibbling around the edges, but understands we have got to transform the economic and political life of this country,” Sanders said in a plaza outside the voting center as a crowd of supporters cheered. Jealous stood by his side.

Although Sanders isn’t endorsing his son Levi’s bid for a New Hampshire congressional seat, he has endorsed Jealous. 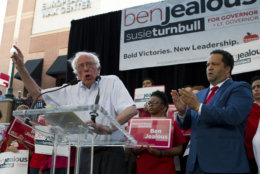 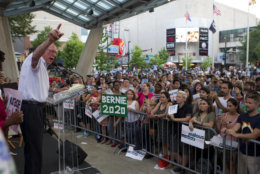 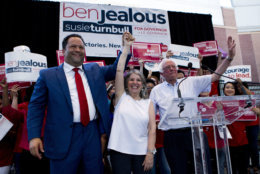 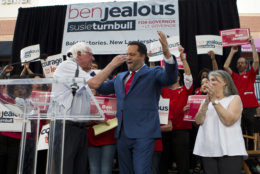 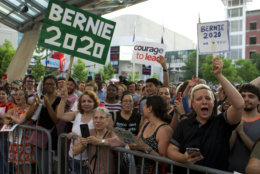 Jealous and Sanders share support for tuition-free college and expanding Medicare to all. Sanders also praised Jealous for supporting a $15 minimum wage and equal pay for equal work.

Sanders also said he wanted to see Jealous become governor to be a loud voice against President Donald Trump in nearby Washington, D.C.

“And when the president of the United States continues to do outrageous things, like separating children from their parents, I want Mr. Trump to hear Ben Jealous’ loud voice,” Sanders said as supporters, many of them young adults, cheered.

The forced separation of migrant children from their parents fueled a weekend of intense criticism of Trump’s immigration policies.

Jealous has received endorsements from other progressive lawmakers, including Sens. Cory Booker of New Jersey and Kamala Harris of California.

Baker has been endorsed by Maryland officials who have worked with him during his two terms as county executive of Maryland’s second-most-populated county and before that, when he was a delegate in the Maryland General Assembly. Sen. Chris Van Hollen and Attorney General Brian Frosh have endorsed Baker, as has former Gov. Martin O’Malley.

Polls have shown Jealous and Baker are in a close race, with considerable distance between the other candidates in a crowded Democratic primary for governor.

Early voting runs through Thursday. The primary is June 26. 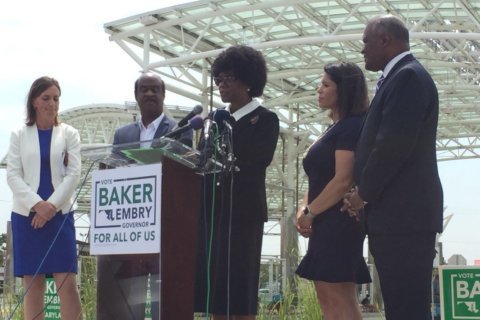