“Everybody was kind of gloomy today. It was kind of quiet — more than usual.  But later on in the day everybody started opening back up and everything, and it was like a normal day.”

Counselors were offered to students, and comfort dogs from Lutheran Church Charities, in Illinois, were brought in to try to bring smiles to their faces. 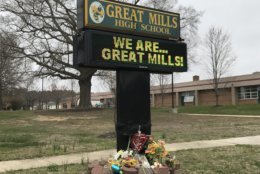 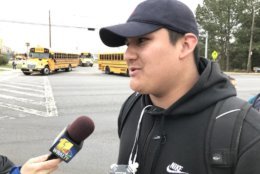 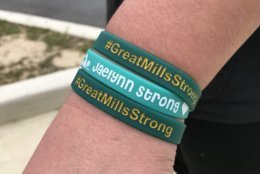 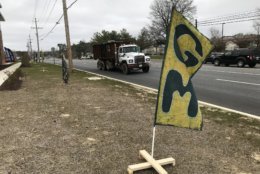 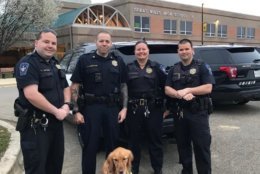 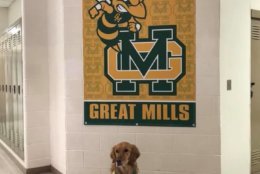 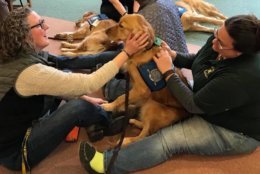 Student Kimberly Martinez said a lot of students were absent from class Tuesday, including someone she knows well.

“I had a friend who didn’t come to school because his mom doesn’t want to let him come back to school for a while until something changed, like more security systems [and] stuff like that,” she said.

Compian said he is not concerned about school security.  “I still feel safe about everything,” he said.

Asked how she’s feeling two weeks after the tragedy, Martinez answered, “A little shocked I guess, because I was in the building (on the day of the shooting) and I knew the person who did it. I didn’t really want to come back today, but we have to do what we have to do.”

Martinez had green and yellow ribbons pinned to her shirt, representing the school’s colors. Compian was wearing three bracelets carrying the slogans #GreatMillsStrong and Jaelynn Strong.

On March 20, 17-year-old Austin Rollins opened fire in a school hallway with a handgun, shooting 16-year-old Jaelynn Willey in the head. The same bullet wounded a 14-year-old boy in the leg.

Rollins then shot and killed himself at the same time that a school resource officer confronted the teen and fired a shot.

Willey died a few days later, after her family chose to remove her from life support.