WASHINGTON — The details of Maryland Gov. Larry Hogan’s budget are being analyzed from all corners.

The complete document, in the form of budget books, was released Wednesday morning. The Department of Legislative Services will hold its first briefing on the $44 billion budget next week, but critics and fans of some of the budget’s features have already gone to work.

The Maryland State Education Association has attacked the addition of $9 million to the state’s Broadening Options and Opportunities for Students Today (BOOST) program, which gives scholarship money to students from low-income families so they can attend private schools. It amounts to a voucher program that benefits students already enrolled in private schools, said Betty Weller, the president of the union that represents tens of thousands of Maryland teachers.

“This is a really, really big deal,” said Dunn, adding that it fulfills the governor’s commitment to programs that Dunn believes are necessary for the bay’s health.

“Both of these programs are vital to the Chesapeake restoration movement and set an example for the entire Chesapeake Bay watershed,” Dunn said.

When he offered a preview of his budget to reporters Tuesday, Hogan called it a first step. The legislature, he said, would have the rest of the lawmaking session to work on the budget.

He hopes that they can “roll up their sleeves and sharpen their pencils and that we can work in a commonsense, bipartisan manner.” 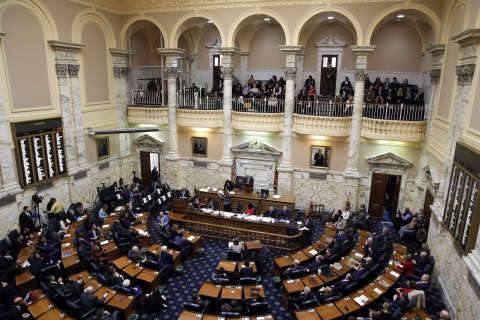