CENTREVILLE, Md. — The soccer field is still trimmed to perfection, but no Russians will be gracing the pitch anytime soon. Nor will they be staying in either of the two Georgian-style mansions or in any of the 10 bungalows clustered on the 45-acre waterfront property.

Russia’s luxurious “dacha” on Maryland’s Eastern Shore sits eerily empty and waiting, a casualty of the diplomatic row with the United States that flared after reports of Russian meddling during the 2016 U.S. presidential election.

Shuttered by the Obama administration last December, the spread is perched at the intersection of the Corsica and Chester rivers in Centreville, Queen Anne’s County, Maryland, a town with a population of less than 5,000. In addition to the two large estate houses, it contains 10 guest bungalows, a small apartment building, four tennis courts, two pools, a boathouse and a private beach.

Raskob, who once worked as a personal secretary for businessman and philanthropist Pierre S. du Pont, made his fortune in the auto industry, helping to manage General Motors from its infancy to one of the world’s most powerful car makers. It was Raskob’s idea to launch a financing arm for the company, a venture that became General Motors Acceptance Corp., or GMAC.

Raskob’s house at Pioneer Point, the 19-room mansion once called “Hartefeld Hall,” is the centerpiece of the current Russian compound, built at some point after the land was acquired in 1925. Raskob constructed a second estate house shortly thereafter for his 13 children, who named it “Mostley Hall,” because it was mostly a long hall of a building.

Raskob passed away in 1950 and the property changed hands a few times until 1972, when what was then the Soviet Union acquired it.

Shortly after the Russians arrived in Centreville, the FBI did too. 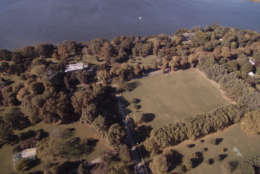 “In the early days, they were the subject of enormous curiosity by the FBI,” Stephen Wilson, president of Queen Anne County’s Board of Commissioners, told Capital News Service. He lives across the river from Pioneer Point.

“The FBI used to send people down here with binoculars, who would stare across the river, as if there was something to be learned about Russians sitting on a beach,” Wilson recalled.

According to Wilson, one idea floated by the feds was to watch the Russians via submarine, a plan Wilson described as “comic” because the Corsica River is only about 10 feet deep.

However, the U.S. government eventually found a way to keep a closer eye on the compound. A property that borders it is still registered to the State Department, according to tax records, which put the value of the Russian spread at close to $9 million.

Judging from how little the Russians interacted with the locals over the years, they likely had a sense they were being watched.

“I would say for the most part they stayed to themselves,” said Joseph Connor, whose family has owned the property a few doors down from the compound for longer than the Russians have occupied it. “You didn’t see them unless they walked out.”

However, locals were occasionally invited over for parties. Connor said he went a few times and that the food was good, the company was likewise, and the vodka flowed freely.

Now that the Russians are gone, local feelings are mixed.

“You had two different reactions from the community when it was closed down,” said Queen Anne’s County Sheriff Gary Hofmann, who visited the compound once as part of an official invite to a group of elected officials. “You had a lot of people saying, ‘Wow, I never knew that (compound) was there.’ And then you had people who were sorry to see some of the folks who they met in the past leave the compound.”

As for the property itself, Hofmann said: “It wasn’t what I thought it would be. There were no secret operatives walking around. It wasn’t like (there were) these covert tunnels we could find.”

Whether the Russians were using the property for work, play or both, it doesn’t appear Pioneer Point will welcome back its owners anytime soon.

In August, under threat of a veto override from Congress, President Donald Trump signed a new foreign sanctions bill that was partially authored by Sen. Ben Cardin, D-Md. In it, the president’s ability to return diplomatic property in Maryland and elsewhere was made subject to congressional review.

After signing the bill, which included measures against North Korea and Iran as well as Russia, Trump called the legislation “significantly flawed.”

“We hope there will be cooperation between our two countries (U.S. and Russia) on major global issues so that these sanctions will no longer be necessary,” Trump added.

Earlier this month, Cardin accused the Trump administration of not enforcing the sanctions outlined in the bill, which he tied to the fate of the Centreville property.

“At this time, the senator (Cardin) believes there is no scenario in which the compounds should be returned to the Russians,” Sean Bartlett, the Democratic spokesman for the Senate Foreign Relations Committee, told Capital News Service. “He does not believe they have been held accountable for their attack on our election. Despite Congress’ strong sanctions bill, the president has yet to begin enforcing it.”

Maintaining the 45-acre spread now falls to the State Department, which seized the compound under authority of the Foreign Missions Act. The legislation gives the secretary of state wide latitude over diplomatic facilities in order “to protect the interests of the United States.”

“We seek better relations with Russia, as the president and Secretary (Rex Tillerson) have said time and again,” said a State Department official authorized only to speak on background. “But we will also be clear-eyed in our engagement with Russia.”

In response to the closing of the Maryland compound and one in Long Island, Russian President Vladimir Putin ordered the U.S. in July to reduce its diplomatic footprint in Russia by 755 people.

When asked on state-run Russian TV why he did it, Putin said: “Because the American side undertook the unprovoked, which is a very important, step in the deterioration of Russian-American relations…”

The U.S. intelligence community had a decidedly different assessment.

A report from the director of national intelligence in January stated: “Russian efforts to influence the 2016 U.S. presidential election represent the most recent expression of Moscow’s longstanding desire to undermine the U.S.-led liberal democratic order, but these activities demonstrated a significant escalation in directness, level of activity, and scope of effort compared to previous operations.”

Since then, three more Russian diplomatic facilities have been ordered shut by the State Department, including a consulate in San Francisco and annexes in New York and Washington.

How long Pioneer Point remains closed is anyone’s guess, but there’s a chance it won’t remain abandoned for long. The Foreign Missions Act allows for a diplomatic property to be sold by the State Department after it has been vacated for a year.

The catch: The Russians would get the money.