Coronavirus News: Fairfax Co. votes to increase substitute teacher pay | Is it time to get a COVID-19 booster? Which one? | Local cases of COVID-19 | How many in DC region are vaccinated?
Home » Maryland News » Bill introduced in Congress…

To coincide with the Battle of Antietam's 155th anniversary, a bill has been introduced in Congress calling for a statue of Confederate Gen. Robert E. Lee to be removed from the battlefield.
Listen now to WTOP News WTOP.com | Alexa | Google Home | WTOP App | 103.5 FM

WASHINGTON — This weekend marks the 155th anniversary of The Battle of Antietam near Sharpsburg, Maryland, the bloodiest one-day battle in U.S. history, one in which more than 23,000 soldiers died, were wounded or went missing.

To coincide with the battle’s anniversary on Sunday, a bill has been introduced in Congress calling for a statue of Robert E. Lee to be removed from the battlefield. 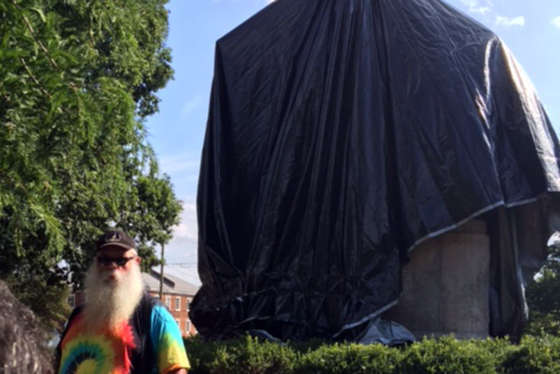 A veteran and self-proclaimed free-speech advocate attempted to take down the black tarp covering a statue or Robert E. Lee in Charlottesville. See photos from the scene.

“We want to see the statue come down as soon as possible,” U.S. Rep. Anthony Brown, D-Maryland, told WTOP.

The bill is co-sponsored by fellow Democratic congressmen John Delaney and Jamie Raskin.

“I think the sole purpose of the General Lee statue in Antietam is to glorify what the Confederacy stood for, which was the perpetuation of slavery and nothing more,” said Brown.

The statue is widely considered historically inaccurate because it depicts the general on his horse, even though Lee was brought to Antietam in an ambulance.

In addition, Brown said, the statue’s plaque is misleading.

“It suggests that General Lee fought to abolish slavery, when in fact the army he led was designed to perpetuate slavery,” he said.

The statue was erected by a private citizen on private land that has since become part of the battlefield’s property.

In a statement, the National Park Service said its policy is to make no changes to Civil War monuments, even when they are considered inaccurate, unless directed to through legislation.

Below is the full statement from the National Park Service:

“Across the country, the National Park Service maintains and interprets monuments, markers and plaques that commemorate and memorialize those who fought during the Civil War. These memorials represent an important, if controversial, chapter in our nation’s history. The National Park Service is committed to preserving these memorials while simultaneously educating visitors holistically about the actions, motivations and causes of the soldiers and states they commemorate. A hallmark of American progress is our ability to learn from our history.

Many commemorative works including monuments and markers were specifically authorized by Congress. In other cases, a monument may have preceded the establishment of a park, and thus could be considered a protected park resource. In either of these situations, legislation could be required to remove the monument, and the NPS may need to comply with Section 106 of the National Historic Preservation Act and the National Environmental Policy Act before removing a statue/memorial.

Still other monuments, while lacking legislative authorization, may have existed in parks long enough to qualify as historic features. A key aspect of their historical interest is that they reflect the knowledge, attitudes, and tastes of the people who designed and placed them. Unless directed by legislation, it is the policy of the National Park Service that these works and their inscriptions will not be altered, relocated, obscured or removed, even when they are deemed inaccurate or incompatible with prevailing present-day values.

The NPS will continue to provide historical context and interpretation for all of our sites and monuments in order to reflect a fuller view of past events and the values under which they occurred.”