WASHINGTON — Local school systems in Maryland are in hyper-drive getting ready to welcome students back Tuesday. But they’re also reaching out to help students affected by Hurricane Harvey. Nearly a week after Harvey crashed into the Texas coastline, the Houston area is beginning its slow recovery from the storm’s catastrophic damage.

Melvin Edwards, who works in the Anne Arundel County School system’s communications office, is a Houston native. As part of a fundraising effort for the Houston Independent School District, Edwards appears in a video on the AACPS website, making an appeal to the school community to help out in the fundraising effort.

Wearing a cowboy hat — which his colleagues said is no prop — Edwards looks into the camera and says, “I’m really proud to be a native of the great city of Houston. The people in my hometown are struggling. But there are two things I know for sure. First, Texans are the most resilient folks in the nation. And second, there is no more caring community than right here in Anne Arundel County.”

Edwards said the school system has launched “Help Houston,” a fundraising effort with the goal of raising $200,000 dollars by Sept. 30. Edwards said the funds will be donated directly to the Houston Independent School District Foundation.

The school system is collecting donations with the goal of raising $132,000 for Houston’s schools — a dollar for every student enrolled in Prince George’s County public schools.

Maxwell challenged other Maryland school superintendents to come up with fundraisers of their own.

That didn’t surprise Anne Arundel County’s schools spokesman Bob Mosier. He said that Maxwell, his former boss, has a competitive streak. Something that, in this case, creates a win-win situation. 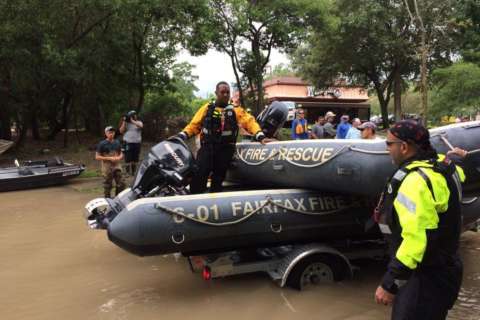