Despite the muskie's reputation as a difficult-to-catch fish, one very big "escape artist" was reeled in by a Hagerstown woman.
Listen now to WTOP News WTOP.com | Alexa | Google Home | WTOP App | 103.5 FM
(1/4) 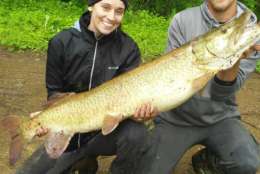 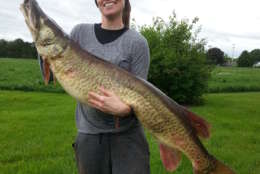 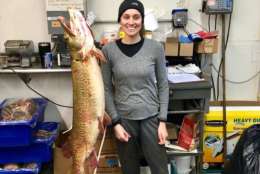 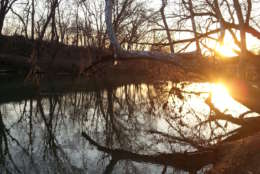 “There’s no other fish that fights like a muskie,” said 26-year-old Tessa Cosens of her catch. “They’re escape artists. They can spit the hooks better than any other fish, so it’s an adrenaline rush the whole time you have it until you land it.”

It took her 15 minutes to land the record-setting fish, caught on the Upper Potomac in Washington County on May 6 and certified Wednesday by the Maryland Department of Natural Resources.

Cosens has been fishing with family since childhood and loves it, but she hadn’t been to the river in months.

“I’m almost three-months pregnant now, and I had some pretty serious morning sickness and haven’t been able to do much of anything,” Cosens said.

“Saturday morning, I woke up feeling great,” she said. “So we headed out about lunch time to the river.”

The fish was caught with lures and no bait, casting from the river bank.

Pulling it in close to shore was complicated by a tangle of tree limbs, brush and debris that Cosens feared could help the fish break the line and escape.

“They call it ‘The Fish of 10,000 Casts.’ It just takes a lot of skill and patience to even catch them, so that’s why we target them,” Cosens said.

Anglers who think they may have a record-setting catch should immerse the fish in ice water to help preserve its weight and call 443-569-1381 or 410-260-8325 so it can be confirmed and certified.