WASHINGTON — Attorney General Jeff Sessions argued against a “sanctuary state” bill making its way through Maryland’s General Assembly on Monday, saying the bill would put the state “more at risk for violence and crime,” and that it’s “not good policy.”

The Maryland Law Enforcement and Governmental Trust Act, sponsored by Sen. Victor Ramirez, D-Prince George’s County, in the Senate, would bar local and state authorities from asking people who have been arrested, and crime victims about their citizenship status. It would also prohibit officers from helping immigration enforcement in their communities. A House version has already passed.

On Monday, Sessions was asked about the March 16 rape of a Rockville High School student by two fellow students, one of whom was in the country illegally. Sessions answered that “Maryland is talking about a state law, to make the state a sanctuary state. The governor is opposed to that, I’m glad to hear. That would be such a mistake.

“I would plead with the people of Maryland to understand that this makes the state of Maryland more at risk for violence and crime, that it’s not good policy.”

Rockville has had an informal policy of not cooperating with Immigration and Customs Enforcement, and a proposed sanctuary ordinance is before the Town Council. Montgomery County is not a sanctuary jurisdiction.

D.C. is a sanctuary city, and Mayor Muriel Bowser has pledged to keep it that way.

Sessions went on to announce that the Department of Justice wouldn’t give any grant money to such jurisdictions.

He said municipalities, states or counties would have to certify that they are not a sanctuary jurisdiction — specifically, that they comply with Title 8, Section 1373 of the U.S. Code, which prohibits “local government entity or official may not prohibit, or in any way restrict, any government entity or official from sending to, or receiving from, the Immigration and Naturalization Service information regarding the citizenship or immigration status, lawful or unlawful, of any individual.”

Trump had said during the campaign that he would “defund” sanctuary cities by taking away their federal funding. But legal precedent suggests that would be difficult.

The Justice Department’s Office of Justice Programs is giving out $4.1 billion this fiscal year for programs such as community policing and more, Sessions said.

Asked what the department would do if jurisdictions continued to refuse to comply with ICE, Sessions said it would be “disheartening,” and that he hoped “the American people and their constituents in their own cities will communicate with them.”

Baltimore County Executive Kevin Kamenetz said in a statement, “The 10th amendment to the Constitution prohibits the federal government from withholding funds to coerce counties to conform to federal policies unrelated to the appropriation. Baltimore County adheres to the Constitution and to sound policing practices that maintain community trust among residents we are obligated to protect. Like the Muslim ban, I am confident the courts will strike down the Attorney General’s counterproductive threat.” 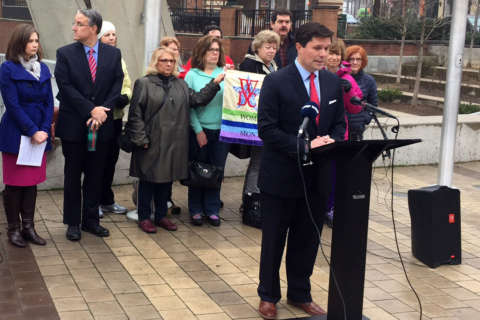 Md. Dems want Hogan to speak out against Trump policies 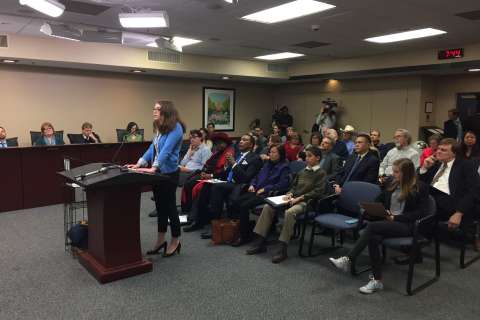