Now, some Maryland lawmakers are responding to Trump’s order, with two new bills aimed at limiting how much state and local resources can be used during the enforcement of immigration laws.

“You can’t deputize law enforcement officials to enforce immigration law like through stopping, arresting or searching or detaining an individual simply to find out their immigration or citizenship status,” said Del. Maricé Morales, D-Montgomery County, who introduced a house version of the “Trust Act” bill.

Morales said her bill and a twin bill in the state Senate — as law — would prevent police officers from questioning victims and those arrested about their citizenship or place of birth. The legislation also would bar officers from assisting in immigration enforcement operations in the communities they serve.

As of now, Frederick and Harford counties participate in a federal program that provides officers training in immigration law and encourages close cooperation between ICE and police departments.

Harford County Sheriff Jeff Gahler doesn’t support the bills, which would prevent his corrections officers from participating in the program.

“We need to cooperate at a local level, at a county level, at a state level and at a federal level on all issues that provide for safety, first and foremost, for our community,” Gahler said.

Gahler said the correction officers are the ones who participate in the program, and they check into individuals who are arrested and brought into jail. Gahler said if someone is in the country illegally, ICE is notified.

Sen. Victor Ramirez, D-Prince George’s County, introduced the senate’s version of the bill, and he believes a judge should be the one who decides whether immigration officials should be notified, not law enforcement officers looking into an individual before he’s convicted.

Ramirez said that the bills are not aimed at putting hardened criminals back on the street.

“We are trying to make sure that people aren’t afraid to get in their car and drive and be pulled over, and be profiled, and be scared of law enforcement,” he said.

Gahler said his deputies are not focused on finding individuals who are in this country illegally.

“However, if they are thinking of robbing a store, or selling drugs or committing other crimes against the citizens, hopefully those people think twice,” Gahler said.

The legislation calls on the state’s attorney general to develop policies that ensure courthouses, hospitals, and public schools are locations where people in the country illegally are not fearful of being discovered by immigration officers. Additionally, state or local officials would be forbidden from making registries based on race, gender, sexual orientation, religion, immigration status or national and ethnic origin.

Morales said she doesn’t disagree that changes need to take place when it comes to the country’s immigration process.

“I think that Congress needs to get some work done, and that goes for both parties, and they need to fix the immigration issue,” she said.

But when it comes to people who are already here — who Morales said want to work and are paying taxes as independent contractors — she believes they should have some sort of recourse.

Both bills still have to make it through both houses of the Maryland General Assembly. Then, they would have to be signed into law by Republican Gov. Larry Hogan. 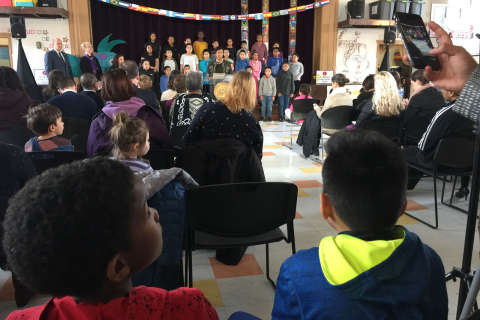