Md. state police: Encouraged by each hour that trooper survives

The day after a Maryland trooper was critically injured in a multicar crash on the Capital Beltway, the trooper was fighting for his life with his family and colleagues by his bedside as the lengthy investigation into what happened moves forward.
Listen now to WTOP News WTOP.com | Alexa | Google Home | WTOP App | 103.5 FM

WASHINGTON — The day after a Maryland trooper was critically injured in a multicar crash on the Capital Beltway, the trooper was fighting for his life with his family and colleagues by his bedside as the lengthy investigation into what happened moves forward.

“Our superintendent is with him. It’s an hour-by-hour thing. With each hour that passes we’re encouraged,” said state police spokesman Greg Shipley.

Ganeshananda has been with the agency for 15 months. His brother is also a state trooper.

No charges have been filed against Prasad Yadavalli, the 60-year-old New Jersey driver who police say hit three other vehicles on the Outer Loop before ramming into the back of Ganeshananda’s unmarked police car. Yadavalli also remained in the hospital Friday with injuries he sustained in the crashes, police said.

The multiple crashes, drivers and witnesses in the Outer Loop crash scenes make for a challenging investigation.

In the initial stages of the investigation, Maryland State Police accident investigators are interviewing the dozens of witnesses to the three separate crashes, looking at the air bag modules of the cars involved and checking drivers’ toxicology reports, said John Erzen with the Prince George’s County State’s Attorney’s Office.

“They’re also looking at cellphones and hoping to be able to look at that data to see if anyone was on a phone or looking on the Internet or something of that nature,” he said.

Eventually, the details investigators collect will make their way to the state’s attorney’s office, where staff will review them and decide whether to file charges, Erzen said.

Ganeshananda responded to a crash around 2 p.m. Thursday north of Route 450, and was parked on the shoulder behind a car involved in the initial crash when his car was struck, Maryland State Police say.

The impact sent Ganeshananda’s car into the already damaged vehicle in front of his. A tow truck then rear-ended Yadavalli’s Mercedes-Benz, which was then thrust into the driver’s side door of the police car, trapping the trooper inside.

Prince George’s County Fire spokesman Mark Brady confirmed that firefighters and medics extricated Ganeshananda from his unmarked vehicle and started treating him on the scene.

Because of the extensive scope of the investigation, Erzen said it takes a long time before they determine whether to file any charges. 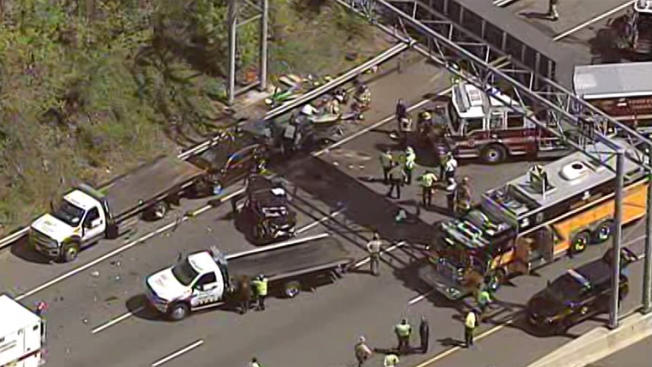