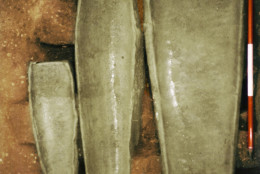 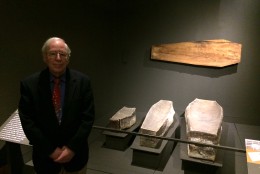 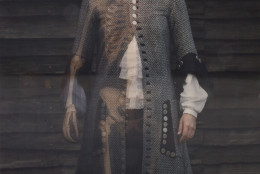 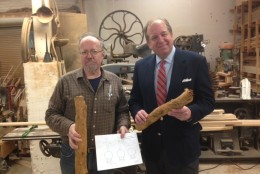 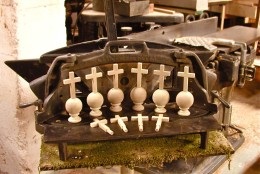 But when a team of workers discovered three lead coffins dating back to the 17th century in the foundation of a long-gone chapel in St. Mary’s City, a remote historical settlement on the southern tip of Maryland and the Chesapeake’s western shore, they were in for a shock.

Expecting to find well-preserved skeletons, Henry Miller, researcher and Maryland heritage scholar with Historic St. Mary’s City and co-director of the project, said he opened the first coffin to find bone that had turned to a white crystal material from the waist up — leading to a burst of perfectly preserved, shoulder-length red hair.

“When we uncovered them, we knew we had a major discovery,” said Miller. “No one had found lead (coffins) in North America, and our goal was to determine who were these people buried in such an unusual manner when Maryland was still so young.”

At that time, people were either buried wrapped in cloth or in wooden coffins, said Miller. Lead was a royal form of burial, reserved for kings, queens and princes in England. He said he knew they had found someone important.

Burt Kummerow, president of the Maryland Historical Society and previous executive director of the Historic St. Mary’s City Commission, said that a process of elimination led them to believe that the coffins belonged to early Maryland leader Philip Calvert, his wife, Anne Wolseley, and a baby from Calvert’s second marriage, to Jane Sewell.

“The lead told us we had a man of means. Philip lived nearby — within a quarter mile of the chapel — and he put up money for the construction of the chapel. History also tells us that he died at the time researchers tell us this skeleton did,” said Kummerow.

“I’m not sure you could prove it in a court of law, but everything points to Philip Calvert. There were no other strong candidates.”

St. Mary’s City was Maryland’s first capital, welcoming English settlers in 1634. According to the Maryland Historical Society, the city was abandoned after losing its charter in 1688 during a revolution in England and overthrow of King James II.

“St. Mary’s was seen as a Catholic city, with the chapel right there in the middle,” said Kummerow.

“The capital was moved to Annapolis because it was more central, but also because, at the time, England was trying to get away from the Catholic church.”

Archaeological explorations in the historic city had been ongoing since the 1970s, and the coffins were first discovered in the foundation of the original Jesuit chapel, said Miller.

He said he knew he had only one opportunity to get it right, and two years were spent pulling together a team to excavate and study the finds.

The project was completely volunteer-driven, bringing more than 150 engineers, researchers and scientists to Maryland.

“There was millions of dollars worth of expertise that was donated,” Miller said. “It was not hard to sell it. It was an unusual project. You just said, ‘We’ve got three lead coffins that hold who knows what,’ and they were in.”

Many volunteers were from Maryland, but there was also a fabric expert from Wyoming, an individual from New York who helped the team peek inside the coffins with a fiberoptic scope before opening them, and the U.S. Army — to name a few, Miller said.

“For over a week, there was a discovery every hour. You just didn’t know what to expect. It was just so exciting, and knew we would never be able to do that again,” said Miller. “It was definitely one of the high points of my archeological career. For certain.”

The team was working hard to get everything done quickly, Miller said, working straight through Halloween night in 1992. While there were no spooks, Miller said mapping soil over 300-year-old coffins is the strangest way he’ll ever spend the holiday.

The coffins and remains have been through various tests, studies and conservation efforts through the past two decades. They also spent five years on display in the Smithsonian National Museum of Natural History.

Now, they’ve returned home to Maryland, featured in “A Tale of Three Coffins: Living and Dying in 17th Century St. Mary’s City” exhibit, on display at the Maryland Historical Society in downtown Baltimore.

The exhibit opens on Maryland Day, March 25. The day represents new beginnings, said Kummerow. It marks the landing of the first settlers in Maryland, as well as the first of the year in the old calendar, the first day of spring and the Feast of the Annunciation, he said.

“These coffins are getting quite a few miles. More than most coffins anyways,” said Eugene Roberts, governor of The Society of the Ark and the Dove, a genealogical society open to descendents of Lord Baltimore and passengers on the first ships that settled in Maryland and sponsor of the project.

He said he is proud to get them back on Maryland soil.

“Many of our members descend from the Calverts personally, or their brothers or uncles,” Roberts said. “One struggles with conflicting thoughts — maybe you ought to leave your dead relatives alone, but there is a historical interest in seeing them as museum objects with education value.”

Alexandra Deutsch, chief curator for the Maryland Historical Society, said she has always been intrigued by 17th century history, but nothing could truly convey what life was like in that era as well as this discovery.

“When they came here, there was this immediate connection — not only intellectual, but incredible human connection to their story,” she said.

She said she worked closely with exhibit designer Charles Mack to bring this experience to visitors and ensure the display was respectful of the content.

“There is an air of mourning that was very intentional on our part,” Deutsch said. “There is a somber tone with lead colored walls and a sanctuary feel where the coffins are displayed.”

After the exhibit closes in December, the coffins will be re-interred near their original St. Mary’s City location in a brick chapel — modeled after the original — that was rebuilt in recent years.

Also brought to the chapel will be crosses made from roots of Maryland’s Liberty Tree, a rallying point during the Revolutionary War and the last of its kind standing in the United States, that Scott Watkins, officer with the Society of Colonial Wars in the State of Maryland, commissioned from Baltimore woodwright Thomas Brown.

Two additional crosses made from the root of the tree are slated to be presented to representatives for Pope Francis and England’s Prince Charles at the Maryland Day ceremony, representing Maryland’s roots from England and a place of Catholic refuge.

This holds quite a bit of symbolism for Watkins.

“The roots represent Maryland the colony and Maryland the state,” he said. “I’m very proud that the roots will be in the first church that was ever built in Maryland, symbolizing how far we have come as far as tolerance in the world today and how far we need to go.”

For Kummerow, the goal of the exhibit is to get Marylanders thinking about their ancestry.

“Where history meets the public is like a marsh in the Chesapeake,” he said. “With these coffins, we not only have stories from the past, but things that give those stories authenticity.”

This story was written by Deidre McPhillips of Capital News Service.