The first of Smithsonian's museums in the D.C. area reopened Wednesday. The Air and Space museum's Udvar-Hazy Center in Chantilly is back in business.
Listen now to WTOP News WTOP.com | Alexa | Google Home | WTOP App | 103.5 FM
(1/5) 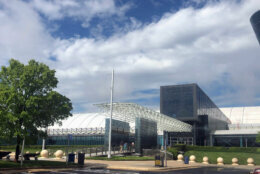 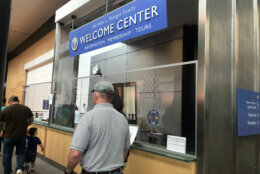 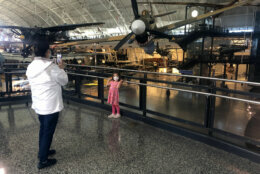 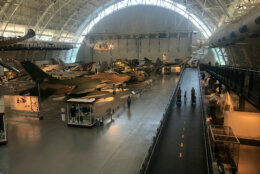 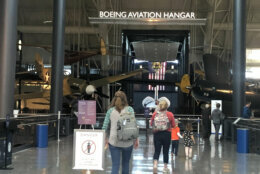 The first of the Smithsonian’s museums in the D.C. area reopened Wednesday.

The Air and Space Museum’s Udvar-Hazy Center in Chantilly, Virginia, is back in business.

Jeremy Kinney, associate director for research and curatorial affairs, told WTOP’s Melissa Howell that the center hasn’t been open since last fall due to the coronavirus pandemic.

“So, this is exciting for visitors who got their tickets,” Kinney said. “They have to follow the social distancing guidelines and all those things, but they can come and see the stuff that’s here, which is very exciting for all of us.”

Kinney said a lot of preparation went into making sure the staff was ready to welcome the public back, as well as getting safety protocols in place, “but also making sure that all the artifacts are clean, that they can be seen, that the walkways are wide and open so people can have their space.”

One of the new things is a display commemorating the life of astronaut Michael Collins, who orbited the moon alone while Neil Armstrong and Buzz Aldrin made their historic first steps on the lunar surface. Collins died April 28.

“He’s also the director who helped build and open the National Mall building of the Air and Space Museum in 1976. So people can see some artifacts he wore on his Apollo lunar mission in 1969,” Kinney said.

Other new additions include the Freedom 7 Space Capsule and a Blue Angels F18 Hornet.

“We want to fill that need that people [have] to see these artifacts,” Kinney said. “They want to get back to a sense of normalcy in regards to seeing the things they’re enthusiastic about. And so the people who love Air and Space, we want to see them; we’re excited about them, but they also kind of keep us going, because we’ve been closed and a major element for us is having the public interaction.”

And people have definitely been eager to get inside.

Steve Klinkaman, who’s retired from the Air Force, traveled from Missouri with his wife and said he was excited to see the space shuttle and the SR71 Blackbird.

“We’re excited. We couldn’t wait to come out,” Klinkaman said. “I think we’re hoping it’s a sign of what’s to come. We were in Washington, D.C., yesterday, and we’re hoping that the museums as well open up down there, so it’ll be great.”

Rebecca Middleton and Ben Savage made their way to the museum from Massachusetts.

“I describe it as Disneyland for some people,” Savage said, adding that they got the first tickets available.

He likened it to a scene from “Star Trek” where a character can actually reach out and touch a piece of history.

“I just remember the sense of adventure that kind of came with it — the pioneers: Amelia Earhart, Charles Lindbergh, that sort of thing,” Savage said.

Middleton said she hasn’t been to D.C. since she was a young girl. “So it’s been a while, and I’m excited to see his face light up.”

Smithsonian’s National Zoo and other museums are scheduled to open later this month.