Even though the Loudoun South team fell short of snagging a Little League World Series title, its state and regional victories are nothing to ignore. And even its hometown Major League Baseball team took time to applaud and honor the efforts and accomplishments of the Virginia squad.

Members of the team stood on the field at Nats Park, eyes transfixed as the major league players swung at ball after ball, while the coaches encouraged them to observe the batter’s player techniques.

Between their at bats, Nats players trotted over to the Little League team and signed autographs.

One Loudoun South player said he was enjoying the afternoon.

“It’s been an exceptional ride. Very, very proud of the kids,” said team manager Alan Bowden. “Even though the ride is over, and we didn’t win the whole thing, finishing in the top five in the country, top six in the world in Little League was quite an accomplishment for them.”

There was also a brief reunion with a former Loudoun player.

Logan Yi used to play for Bowden. Yi spotted his former coach on the field. The two shook hands and posed for a photo. Yi, who is a high school senior now, said it was a coincidence they were on the field at the same moment.

“I think it’s cool to see them here at Nats Park,” Yi said of the current Loudoun South team. He told WTOP he and his family were there for “a hitting event with Coach Long,” the hitting coach for the Washington Nationals.

As for next year’s team, Bowden said due to new Little League age restrictions, all but three of this year’s team, will age out of the league, “except for the three 11-year-olds.”

But Bowden said interest in the team has blossomed. 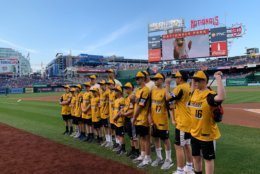 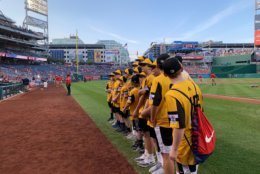 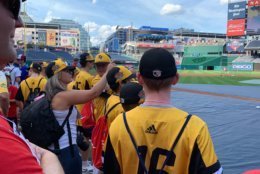 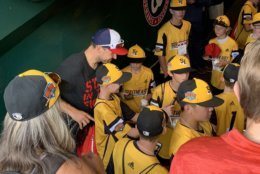 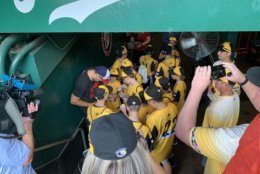