Members of the Leesburg, Virginia, community are invited to a dialogue at the Douglass School to discuss placing historical markers at the sites of three lynchings in Loudoun County that occurred between 1880 and 1902.
Listen now to WTOP News WTOP.com | Alexa | Google Home | WTOP App | 103.5 FM

Charles Craven — an African-American man — was lynched in Leesburg, Virginia, in August 1902 and buried in what was known as Potter’s Field, near the intersection of East Market Street and Catoctin Circle.

Thursday evening, almost 115 years later, members of the community are invited to a dialogue at the Douglass School, across Market Street — or Route 7 — from the former field, to discuss placing historical markers at the sites of three lynchings in Loudoun County that occurred between 1880 and 1902, in which Craven, Page Wallace, and Orion Anderson were killed.

Between 1877 and 1950, more than 80 African Americans were killed in lynchings throughout Virginia, according to research by the Equal Justice Initiative.

Former Loudoun County NAACP president Phillip Thompson has been working with the community to place historical markers at the sites of the three lynchings: at the former Potter’s Field, nearby, at the site of the former freight station on the W&OD Trail along Harrison Street and near the bridge at Point of Rocks.

Thompson and current NAACP president Pastor Michelle Thomas will participate in the panel discussion, which is organized by four master’s degree candidates at the School for Conflict Analysis and Resolution at George Mason University. The group says they are working with local governments in developing plans for the markers.

According to organizers, once the markers are placed, there are plans to collect soil from the lynching sites, and send it to the National Memorial for Peace and Justice, in Montgomery, Alabama.

The discussion of placing historical markers where African-Americans were murdered comes as many jurisdictions in Virginia debate the future of statues, memorials and buildings named for members of the Confederacy. Just over a half-mile from the Douglass School, a Confederate soldier statue stands near the Loudoun County courthouse.

In a release, organizers said: “Driven by principles of respectful listening and acknowledgment of personal experiences, community dialogues are meant to provide all and any members of the community a space in which to share perspectives on topics that may be sensitive or difficult to discuss.”

The Thursday discussion, at The Douglass School, at 407 East Market Street, in Leesburg, is scheduled to run from 6 – 8 p.m. 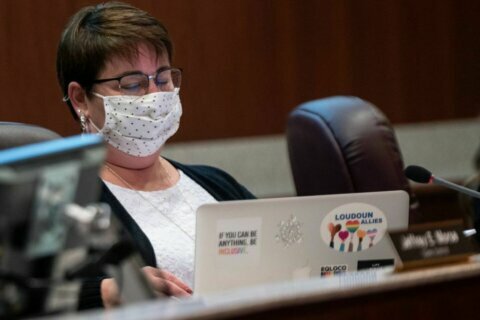