Juli Briskman from Virginia was riding her bike near to President Trump's Sterling golf club in October last year when Trump's motorcade drove by. A photo that soon went viral shows her raising the middle finger of her left hand. Briskman said she was fired by her employer after the incident. On April 4, she filed a lawsuit against her former company Herndon, Virginia-based Akima LLC.
Listen now to WTOP News WTOP.com | Alexa | Google Home | WTOP App | 103.5 FM
(1/3) 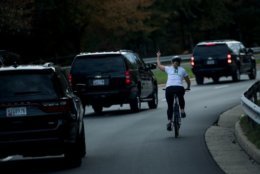 WASHINGTON — In October 2017, an image showing Juli Briskman from Sterling, Virginia, giving President Trump’s motorcade the middle finger went viral, but it also reportedly led to the single mother of two being dismissed from her job.

On April 4, Briskman announced she was filing a lawsuit against her former company Herndon, Virginia-based Akima LLC.

The suit alleges when Akima forced her to resign, it violated Virginia employment law.

Briskman made the gesture on Oct. 28 as she was riding her bike near Trump’s golf club in Sterling and saw the president’s motorcade leaving the club.

Journalists accompanying Trump captured her message to the president and shared the images online.

Although Briskman’s face is not visible in the photo, she disclosed the incident to her bosses at Akima after the image went viral.

According to the lawsuit, “they forced her to resign, claiming that Ms. Briskman’s posting of a photograph of the incident on her Facebook page … violated Akima’s social media policy.”

Briskman’s suit states that it violates Virginia employment law for a government contractor to fire an employee out of fear of unlawful government retaliation.

“I criticized @realDonaldTrump, but I never thought I would lose my job b/c I live in the world’s greatest Democracy. I am fighting back because no American should have to choose between their pocketbooks & their principles,” Briskman tweeted.

She added she expects to win the case.