Cyclist assaulted on W&OD trail in Loudoun Co. by another cyclist

The victim was attempting to pass two other cyclists when a rider coming from the opposite direction reached out and hit the victim's helmet with his arm.
Listen now to WTOP News WTOP.com | Alexa | Google Home | WTOP App | 103.5 FM

WASHINGTON — Just after 2 p.m. on Sunday, a cyclist was riding his bike west on the Washington and Old Dominion Trail in Loudoun County when he was assaulted by an east-bound cyclist.

The victim was attempting to pass two other cyclists when a rider coming from the opposite direction reached out and hit the victim’s helmet with his arm. He was seriously injured, but is now in stable condition.

Witnesses said the suspect was approximately 6 feet tall, and he wearing a white or light green Castelli jersey, a helmet and sunglasses. Witnesses described his bike as a time trial bike or triathlon bike. 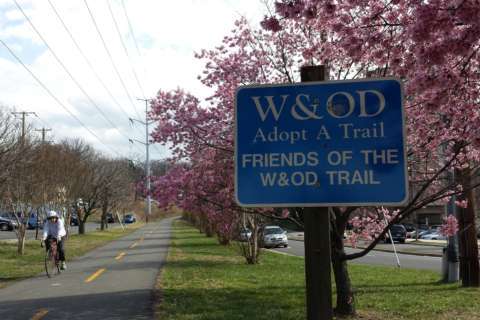