Driver in Va. crash that killed infant in stroller sentenced to 1 year in jail

The driver of an SUV that struck and killed an infant in a stroller in a Lansdowne, Virginia, crosswalk in August 2016, has been sentenced.
Listen now to WTOP News WTOP.com | Alexa | Google Home | WTOP App | 103.5 FM

WASHINGTON — The SUV driver who struck and killed an infant in a stroller in a Lansdowne, Virginia, crosswalk in August 2016 has been sentenced to one year in jail.

The sentence was the maximum John Miller IV, 47, of Leesburg, faced after prosecutors dropped an involuntary manslaughter charge last year.

Miller had pleaded no contest in October to a misdemeanor reckless driving charge.

Five-month-old Tristan Schulz was killed on Aug. 31, 2016, as his mother, Mindy, pushed his stroller across Riverside Parkway at Coton Manor Drive. Mindy Schulz was severely injured when Miller’s Jeep Cherokee slammed into the mother and her son, but she has recovered.

In handing down his sentence, Loudoun County Circuit Judge Douglas Fleming called the crash a tragic accident but said Miller failed in his responsibility to be attentive while driving.

The judge said that one year in jail is not justice or fair. But he said that’s all he could do under the law.

Before the sentence was handed down, Miller apologized to the Schulz family again, giving his “deepest and sincerest apology.”

Miller told the courtroom he was paying attention to traffic in the intersection and simply didn’t see Schulz. He said not a day goes by when he doesn’t think about what he’s done.

In sentencing hearings this week, Mindy Schulz gave heart-wrenching testimony describing the loss of her son.

Testifying Thursday, Schulz said the pain of her broken bones was nothing compared to the mental anguish she suffered over the loss of her son. She said she suffers “torturous grief” every day. “Who I had been was gone forever,” she said in more than an hour of testimony Friday during which she sobbed at points.

Schulz suffered a concussion, severe leg injuries and broken ribs in the crash.

Before prosecutors dropped the most serious charges against Miller, they had initially tried to prove he was using his phone at the time of the crash. However, examinations of cellphone activity eventually showed that to be false.

Prosecutors had asked the judge for the maximum year in jail, although they said the punishment available was “hopelessly insufficient.”

Miller’s lawyers had argued in court papers that he should be sentenced to probation, a fine and community service. His lawyers said the intersection where he crashed into the Schulz and her son was dangerous, because it wasn’t timed to allow pedestrians to start crossing the road before drivers making left turns were given the green signal. In addition, his lawyers said Miller never saw Mindy or Tristan Schulz as they crossed the road because of a blind spot. 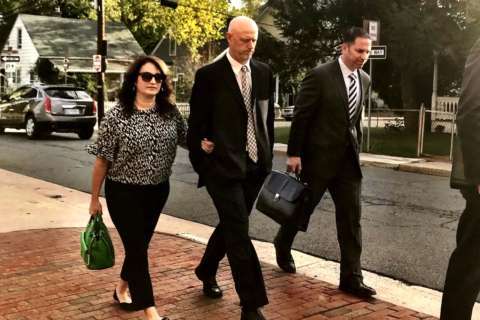