Doreen Gentzler interviewed Prince George’s County’s own tennis superstar Frances Tiafoe on Tuesday; it was her last interview before she caps off her 33-year run delivering the news to the D.C. area.

Gentzler spoke with WTOP’s Hillary Howard and John Domen Tuesday and said candidly that she does not know what it’s going to feel like Monday morning, when she wakes up and does not have to go to work.

“It’s kind of strange to be leaving,” Gentzler said.

She told NBC Washington that she does not have a plan for what she will do next.

“I’m just going to take a break and reclaim some of my personal time … and really consider what my next chapter looks like,” she said.

She announced her retirement back in October, saying that it was not an easy choice but it was something that she had been considering for a while.

Gentzler joined the news team in 1989, welcoming the chance to return to her hometown after working in Philadelphia. Gentzler is a native of Arlington, Virginia.

She first worked with Jim Vance, George Michael and Bob Ryan on the news desk; and later, with Jim Handly, Wendy Rieger and Doug Kammerer, as well as “all the other outstanding people on this team,” Gentzler said last October.

Gentzler talked about the successes and the losses she experienced in her long career, which have been pretty public, including the deaths of Jim Vance and Wendy Rieger.

“That was very difficult getting through both of those,” Gentzler said.

She said she and Vance had different personalities, but they worked well together and made each other laugh.

“We had a great time working together, and then you throw in George Michael and Bob Ryan and Arch Campbell. Those were some really, really fun times,” Gentzler said.

Reflecting on her career, she said that there are two things she would advise her younger self: Don’t take yourself quite so seriously (“It’s only TV; it’s not brain surgery”) and “Writing is the most important skill that you can have.”

Gentzler’s last day on on-air is Wednesday at 6 p.m. And while she said she does not know what her colleagues have in store for her and she hopes that she can get through the day without crying, “I’ll be wearing waterproof mascara tomorrow.”

Watch Gentzler talking about her career delivering the news to the D.C. area. 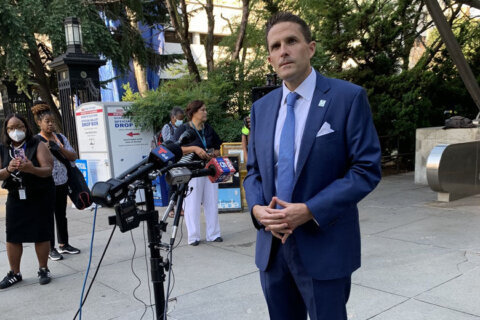