From afar, it may look like a “bunch of nerds swinging sticks;” but Dagorhir, which started in the D.C. area, is a live-action role-playing game that participants say is a sport that involves practice, training and skill.
Listen now to WTOP News WTOP.com | Alexa | Google Home | WTOP App | 103.5 FM

In a field behind a Montgomery County Public Schools’ office in Wheaton, Maryland, several people dressed as knights, a Roman general and characters from history and fiction were locked in fierce battle one recent sunny and pleasant Saturday.

It’s called Dagorhir, and while it may look like a bunch of “nerds swinging sticks” — that’s how one of its leaders described it — it’s a LARP: a live-action role-playing game, in which participants portray characters through physical action, often wearing costumes and carrying props. Participants say it’s a sport that involves practice, training and skill.

Unlike other LARPs, however, “We have no magic involved in the game,” said Steve Foster, the executive director of Dagorhir. “There are no spells. There are no wizards or warlocks or anything else like that. It’s basically just based off of straight combat.”

Millie Tansill, an administrator for Guard — one of the units playing Saturday — said, “It’s about halfway between fantasy and realism. And, it is a full-contact, live-action role-play. That is, people use weapons.”

The Wheaton battle was among units Guard, Rome and Gestiguiste (pronounced “Just the guys”). They are part of the Aratari chapter, which is the first and one of the larger chapters of Dagorhir nationwide. 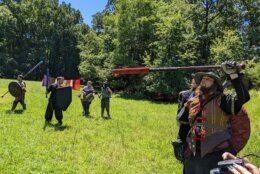 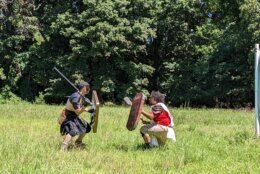 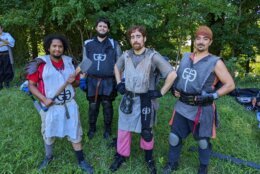 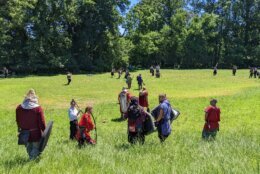 How the game is played

Dagorhir is one of the earliest LARPs, started in 1977 by Brian Weise, from Rockville, who was 19 at the time and loved the works of J.R.R. Tolkien. (Dagorhir means “battle lord” in one of the Elvish languages Tolkien created.)

In 2000, Weise told The Washington Post that he grew up playing in the woods, and the idea for what became Dagorhir came to him while reading “The Lord of the Rings” in New York City and wondering how he could “play this book.” Foster said Weise has not been part of the Dagorhir organization in a very long time.

Technology has changed since Dagorhir began, and the weapons, which are padded, are more sophisticated than old couch cushions duct-taped to a PVC pipe that players used to wield, Foster said.

Not only can players use weapons, but they are expected to use full force when they strike an opponent.

Tansill said the object of the game is for people to have fun and not get hurt. To ensure that, there are rules around how you can use weapons depending on what they are; there’s also a medic at every battle; and weapons are inspected before each game.

Currently, weapons typically have extruded fiberglass or carbon fiber rods for their core, which are lighter and much stronger, Foster said; and those are wrapped in foam that’s similar to the kind used in camping mats.

If you buy the weapons and the garb — the clothes players wear during battles — it can get quite expensive. However, Foster said that you don’t need money to participate; you just need to find an event, adding that the Dagorhir community has been helpful in lending new players what they need to get started.

Or, you can try to make the weapons and garb yourself. Tansill made most of what she was wearing on Saturday, including her dress and her sash. With tutorials on YouTube and TikTok, Foster said, people can try to do it themselves, but it might take them six hours to make.

“But there are a lot of crafty individuals who are willing to learn those skills and do that. And there are some absolutely amazing examples of homemade pieces of equipment that are just absolutely gorgeous, beautiful, super functional. And people take a lot of pride in their activities that way,” Foster said, adding that when he started, Dagorhirrim (that’s what Dagorhir fighters are called) used to wrap shag carpeting around their legs to look like barbarian boots.

‘Not really considered all that strange anymore’

Movies and shows such as “The Lord of the Rings” trilogy, “Game of Thrones” and “Stranger Things,” which incorporate several medieval and fantasy themes, contributed a lot to the popularity of Dagorhir, Foster said.

“So, it’s not really considered all that strange anymore. Whereas, when I started, we didn’t have too many movies like that. The biggest influencer of my youth would have been ‘Conan the Barbarian’ or ‘Excalibur,’ Foster said. “It’s in popular culture these days. So people recognize it, and they’re much more accepting of it these days.”

Participants range in age, including some who have been playing since Dagorhir’s founding, Tansill said. There’s no typical age group but it does attract a lot of college-age folks and men, she said.

“Anybody that’s enjoying the game and helping others enjoy it, that is a good Dagorhir fighter to me,” Foster said.