The first group of beagles that are being removed from a Virginia breeding facility have been carried off a transport van at the Humane Society's care and rehabilitation center, at an undisclosed location in Maryland.
Listen now to WTOP News WTOP.com | Alexa | Google Home | WTOP App | 103.5 FM
(1/3) 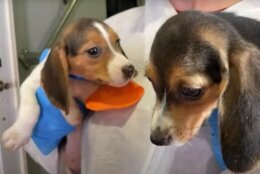 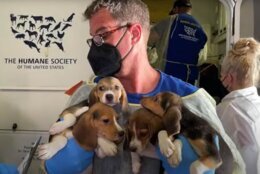 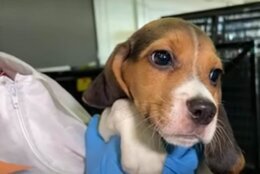 The first group of beagles that are being removed from a Virginia breeding facility have been carried off a transport van at the Humane Society’s care and rehabilitation center, at an undisclosed location in Maryland.

Approximately 200 beagles arrived at the Humane Society of the United States facility in Maryland on Thursday night.

This is the first group of beagles of approximately 4,000 to be removed from Envigo’s Cumberland, Virginia, facility as part of a court-approved transfer plan submitted by the Department of Justice and Envigo, with the agreement of the Humane Society.

Two by two, the beagles were carried off the van by volunteers, to be logged in, as the first step toward adoption. Some of the dogs blinked at the attention, others looked around.

“They’re (volunteers) reading their ear tattoos as they come in,” said Humane Society’s Kirsten Peek, describing the arrival on a livestream. The dogs’ ears were tattooed at the Envigo facility, where beagles were bred for medical research.

“They’re taking them out in groups, so they stay with their litters, as they move into their lodgings here at the care and rehabilitation center,” Peek said.

Thursday, as the animals were checked-in to receive “love, affection, and some good food,” Peek said this would be a short layover, before they go to animal rescue groups that will care for the beagles, until they can be adopted.

“These guys will just be here for a couple of days, until they’re picked up by other partners who are coming in, over the weekend, to move them into their facilities,” said Peek. “And a lot of these dogs should be up for adoption pretty quickly.”

The Humane Society has a ‘4,000 beagles!’ website, listing shelters which will process foster and adoption requests.

After being born in the breeding facility, Peek said within days these beagles “will be on couches, they’ll be learning to walk on leashes.”

“Hopefully everyone will have a good rest tonight,” said Peek. “It’s been a long day.”