Baltimore and D.C. were on the verge of scoring a goal together, but were denied Thursday as the host cities for the 2026 World Cup were announced.
Listen now to WTOP News WTOP.com | Alexa | Google Home | WTOP App | 103.5 FM
(1/5) 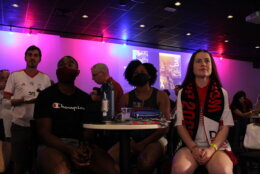 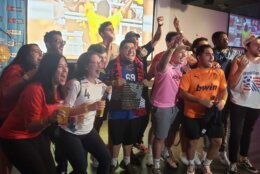 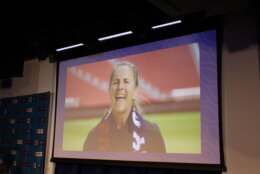 Baltimore and D.C. were on the verge of scoring a goal together, but were denied Thursday as the host cities for the 2026 World Cup Thursday.

FIFA unveiled the host cities in a nationally televised program on Fox Sports and Telemundo, naming 11 U.S. cities as hosts but not the nation’s capital. D.C. and Baltimore combined bids to host games in 2026 with the Charm City’s M&T Bank Stadium as the key venue and the National Mall hosting fan fest festivities.

As the cities names were announced, soccer fans gathered at a reveal party at Penn Social in D.C. and organizers grew nervous on the bid’s hopes. When Boston was called, sounds of confusion and shock surrounded the room. As Philadelphia was announced, someone shouted out “No” as a chorus of boos started to ring out.

Once New York — a World Cup Final host favorite — was the last city announced, shock filled the room with more people voicing their displeasure with the decision.

Fans such as Cameron Alavi were disappointed, saying that he thought the combined bid brought the right amount of infrastructure needed to host the premier event.

“I thought maybe D.C. would get some of the trainings and practices of the teams and then Baltimore would get the big games since their nice stadium is up there,” Alavi said.

Cheyenne Foster, a soccer content creator, said she was not surprised at first, given how other cities ramped up their bids. However, as someone who’s lived in D.C. for 10 years, it is still disappointing that the tournament won’t host games anywhere near the region.

“I know this is four years away, so we’ll kind of have some separation, and things will look very different in some of these other cities, but it just stinks,” Foster said. “It really does.”

Moments after the decision was made, Max Brown, chairman of the board of directors of Events DC, who was in charge of the D.C. side of the bid, spoke to the crowd. He said the District has the public willing to support the games as the area is the No. 1 ranked television market for the English Premier League.

“So I don’t know what the hell FIFA was looking at when they made that decision,” Brown said.

In a joint statement released later Thursday evening, Brown and Mark Ein, co-chair of the DC2026 Advisory Board, said that while they were disappointed with the outcome, they congratulate the cities selected to host the games. They added that they look forward to celebrating the 2026 World Cup around the U.S.

Washington Post soccer reporter Steven Goff told WTOP that the joint bid’s snub was “a bit of a surprise” but not an indictment of D.C. Instead, it is more of a failure of FedEx Field, the home stadium of the NFL’s Commanders, and not being considered good enough in FIFA’s eyes.

“If you have a decent stadium, here in Washington, it’s a slam dunk,” Goff said. “The nation’s capital of a World Cup country always hosts games. That was not the case here. FedEx Field is just not good enough. And Baltimore stadium, although nice, didn’t push the bid over the finish line.”

But not all hope is lost in the region to host a FIFA Fan Fest on the National Mall. When asked if D.C. could still host the festivities, Colin Smith, FIFA’s chief competitions and events officer, said in a news conference that the governing body plans to engage with cities that failed to host matches.

A @dc2026 question from @HenryBushnell of @YahooSports at the @FIFAWorldCup post announcement press: @HenryBushnell: so is there still going to be a FanFest on the National Mall?

(watch the clip to the end) pic.twitter.com/245pD6OQ3j

For the first time ever, three nations will host the World Cup in 2026. Under FIFA’s plan, 60 of the tournament’s 80 matches will be played in the United States.

The 2026 World Cup will be the first to feature 48 countries competing in the monthlong tournament, which is expected to begin around June 11 with a possible final date of July 12.

WTOP’s Dave Johnson and Sarah Jacobs contributed to this report.