On Memorial Day, the president, visiting heads of state or dignitaries usually get the esteemed honor of placing a wreath at the tomb. But on this Saturday before the official holiday, everyday people were allowed to honor the fallen as they quietly and carefully placed flowers at the tomb's base.
Listen now to WTOP News WTOP.com | Alexa | Google Home | WTOP App | 103.5 FM
(1/3) 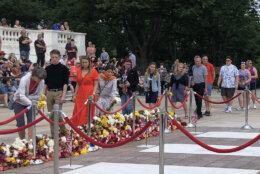 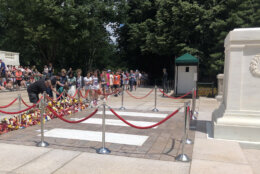 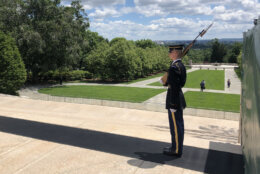 Visitors to Arlington National Cemetery were given the rare opportunity to lay flowers at the Tomb of the Unknown Soldier.

In groups large and small, people placed flowers in front of the tomb, creating a colorful and growing tribute of roses, daisies and carnations.

“It was very peaceful. People were being very respectful and I think everybody appreciated the opportunity to do it,” said Keri Bevis of Catlettsburg, Kentucky.

The solemn occasion marks the day in 1921 when four unknown soldiers “were exhumed from four World War I American cemeteries in France” and eventually chosen to symbolize missing servicemen.

On Memorial Day, the president, visiting heads of state or dignitaries usually get the esteemed honor of placing a wreath at the tomb.

Video: Visitors lay flowers at the Tomb of the Unknown Soldier

But on this Saturday before the official holiday, everyday people were allowed to honor the fallen as they quietly and carefully placed flowers at the tomb’s base.

“To think of all the people that we don’t know, that passed away, all the ones that never came home and are still missing,” Boyer said.

“It gave me time to reflect back on all the sacrifices that the people before us have given to keep this country a free country,” added Kauppila.

Only a few steps away, a guard from the Army’s 3rd U.S. Infantry Regiment at Fort McNair who keeps ceremonial watch over the tomb, continued his precise and dignified vigil.

The flower laying ceremony is new this Memorial Day weekend at the Tomb of the Unknown Soldier. It follows another well-received laying ceremony conducted last November that marked the centennial of the tomb.

Officials at today’s event said the first manifestations of Memorial Day took place in the 19th century when it was called Decoration Day. During that time, men and women would flock to the rolling hillsides of Arlington National Cemetery and place flowers at the graves of fallen Civil War troops.