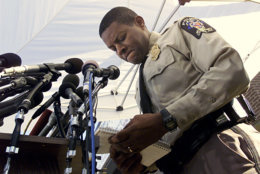 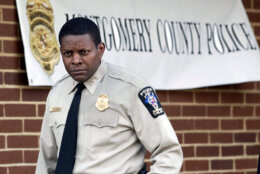 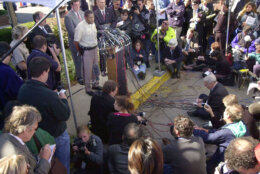 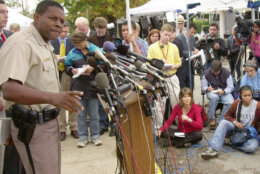 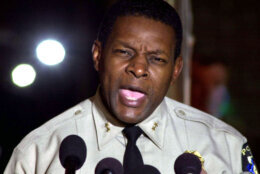 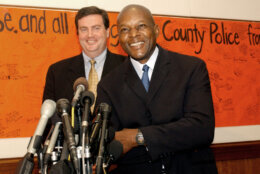 Former Montgomery County Police Chief Charles Moose, who became the public face of the investigation into the Beltway Sniper rampage that terrorized the D.C. region, has died.

Moose, who left his post in 2003, was 68, according to a statement from the department.

Moose’s wife posted a message on Facebook saying he died at home on Thanksgiving Day. No cause was given.

“We are extremely saddened by the news announcing the passing of former Chief Charles Moose,” said Montgomery County Police Chief Marcus Jones. “He was a great leader and led our department through the D.C. Sniper investigation, one of the most difficult crime sprees in our country’s history. We send condolences to his wife Sandy and all of his family and friends.”

Moose also served as the first Black police chief of Portland, Oregon, in the 1990s.

Doug Duncan, who served as Montgomery County executive from 1994 to 2006, hired Moose in 1999 to serve as police chief of Maryland’s most populous county.

“In my first meeting with him, you could tell he was a leader,” Duncan told WTOP. “You could tell how seriously he believed in police work and how much he cared about police officers. Great guy, great sense of humor, but very serious when the job required it — as, of course, it did during the sniper shootings.”

Montgomery County State’s Attorney John McCarthy, who was then legal adviser to the massive multi-agency Beltway Sniper task force, told WTOP, “I think he became sort of a national hero and beloved figure in Montgomery County for the role he played” in the sniper investigation.

Steady presence in front of the cameras

During three weeks in October 2002, 13 people were shot and 10 killed across the D.C. region in a series of seemingly random shooting attacks carried out by 41-year-old John Allen Muhammad and 17-year-old Lee Boyd Malvo, who came to be known as the Beltway Snipers.

The first burst of shootings all took place in Montgomery County, and the attacks, which terrified the D.C. area and gripped the nation, turned Moose “from unknown suburban police chief to one of the most recognized people in the world,” The Washington Post reported at the time.

Moose held multiple news conferences a day — many broadcast live on cable news and watched across the country. “I think [the press conferences] were reassuring that there were resources being brought to bear on this matter that were literally unparalleled,” McCarthy said.

The shooting attacks, which came just a year after the Sept. 11 terror attacks, claimed the lives of regular people going about their lives — pumping gas, shopping, mowing the lawn.

On the morning of Oct. 7, after a 13-year-old boy was shot and critically wounded after being dropped off at Benjamin Tasker Middle School in Bowie, Maryland, Moose famously got emotional at a news conference later in the day.

“Shooting a kid — it’s getting to be really, really personal now,” the chief said in a wavering voice. Reporters noted a tear rolling down his cheek.

As the public face of the investigation, which also included the FBI and the Bureau of Alcohol, Tobacco, Firearms and Explosives, Moose sometimes turned his ire on the media coverage.

At the scene of the Oct. 7, 2002, middle school shooting, investigators found a tarot card with the words “Call Me God” scrawled on it and a directive to investigators not to release the chilling discovery to the press.

But the tarot card detail later made its way into reporting by The Washington Post and WUSA Channel 9.

“I have not received any message that the citizens of Montgomery County want Channel 9 or The Washington Post, or any other media outlet, to solve this case,” Moose lectured. “If they do, then let me know. We will go and do other police work, and we will turn this case over to the media, and you can solve it.”

In an interview with WTOP’s Neal Augenstein in 2012 marking the 10th anniversary of the shootings, Moose later said some of his anger for the cameras was choreographed, since he suspected the snipers were tuning into the news conferences.

‘The man many of us remember’

The three weeks of fear led to a media frenzy. News conference outside Montgomery County police headquarters regularly drew a crush of reporters.

On Friday, Augenstein reflected on covering the story for WTOP.

“Each day, reporters who’d been working their investigative sources around the clock came to the briefing, and heard the official latest from the chief,” he said.

“As with any active investigation, police don’t answer every question a reporter asks, and don’t provide the information the public may be asking. That’s the way police investigations have to work — they often don’t share details that only the suspect might know. Chief Moose knew that at some point, after the rampage was over, there would be a trial. And protecting information for a successful prosecution is probably second on the list of a police chief’s job, behind keeping the public safe. Chief Moose took both of those responsibilities very seriously.”

McCarthy, the state’s attorney, said Moose’s public role was no accident: “The strategy was to have a single point person, so that if the persons who were committing these acts ever chose to reach out to a local or government official, they would know who to turn to. And that actually turned out to be absolutely dead on, because during the time of the attacks, as people may or may not recall, there were attempts by Lee Boyd Malvo to reach out to public officials, and to reach out specifically to Chief Moose, as the killings continued.”

After the fact, there was second-guessing about the investigation and questions raised about how much information investigators were willing to publicly share with the public as the attacks were still going on.

For example, when investigators examining ballistic evidence determined Muhammad and Malvo were the suspected shooters on Oct. 23, Moose held a late evening news conference to announce an arrest warrant had been issued for the older of the two on federal weapons charges.

But at the podium, Moose didn’t reveal the suspects were believed to be driving a blue 1990 Chevrolet Caprice with New Jersey license plates.

Only after those details were leaked to the media and reported did an alert driver spot the Caprice at a rest stop off Interstate 70 in Frederick County, Maryland, sending authorities swarming.

Muhammad and Malvo, who were both sleeping inside the car, were arrested — bringing the three weeks of terror around D.C. to an end.

Reflecting on Moose’s role, Augenstein remembered: “By all accounts, Chief Moose always told the truth in those briefings. Maybe not all that reporters asked, but what he said was truthful. He protected information, as a good police chief would do. He answered questions, respecting the fact that reporters were asking them on behalf of their listeners, viewers, and readers. And, while there was information that was leaked, and ultimately reported, the arrests were made. The prosecutions were successful. And Chief Moose was the man who many of us remember.”

Because of the extensive media coverage, Moose was nationally recognized figure for a while.

Duncan said not long after the arrests of the two suspects in the shootings, he went on a college visit with his son. When he was checking into the hotel, the desk clerk recognized his name on his credit card.

‘We’ll miss him quite a bit’

Moose’s tenure with the department ended in controversy.

Moose resigned from the county department in June 2003 after an ethics dispute about his plans to write a memoir about the sniper investigation. A county ethics panel said the book deal amounted to him unfairly profiting from his public position.

After Muhammad and Malvo were arrested, many supporters urged Moose to write a book, Duncan said.

“I think he got a raw deal during that whole thing, and things turned a little sour there at the end, which they shouldn’t have,” he said.

Moose’s book, “Three Weeks in October: The Manhunt for the Serial Sniper” was published in 2003.

Moose briefly worked as an officer for the Honolulu police department before retiring from police work.

Duncan said he hadn’t kept in touch with Moose recently, but that he was planning a get-together next year to mark the anniversary with some of the officials who led the search, “just as a way to come back together 20 years later, and now he won’t be able to be there. It’s very sad. We’ll miss him quite a bit.”

In a statement Friday, current County Executive Marc Elrich said he was saddened by the news.

“For 23 days, Chief Moose provided a calming presence in the midst of the terror and fear that consumed our County and the Washington Region and was nationally recognized for his efforts. We are forever grateful for his contributions to public safety during his tenure, and our thoughts are with his wife, Sandy Moose, along with his family and friends. I urge the residents of Montgomery County to remember and appreciate Chief Moose’s leadership and service.”

Muhammad and Malvo were both convicted in Virginia and Maryland in the slayings. Muhammad was executed in 2009; Malvo’s life prison sentences in both Maryland and Virginia have been challenged on the basis of his age at the time.