With these warm weather activities returning, swimming experts are out with a warning for parents, don’t assume your young child knows how to swim.
Listen now to WTOP News WTOP.com | Alexa | Google Home | WTOP App | 103.5 FM

With warmer weather, many families are making plans for beach getaways or even trips to the local pool. With these warm weather activities returning, swimming experts are out with a warning for parents: Don’t assume your young child knows how to swim.

“A lot of kids have seen regression with their swimming skills,” said Zachary Healy, a swim instructor and the general manager at Goldfish Swim School in Gaithersburg, Maryland.

Healy said not swimming during the winter time during a normal year can lead to children forgetting lessons they already learned, but this year the problem is compounded by the fact that the pandemic has kept some kids out of the water for more than a year.

He said that means some kids who have had swimming lessons could struggle in the water, because the practice that is needed to build muscle memory hasn’t been happening.

“If children aren’t continuously practicing and reviewing their skills, it’s very common, especially the younger the child is, that they could forget all together what to do,” Healy said.

Healy said one of the most important things they teach children is to turn around if they fall into the water.

“The closest place and the safest place is actually right behind you, we don’t want to swim further out into the water,” he said.

He also said he trains young children to roll over onto their back in the water, which he said not only allows them to breath but to also look for help and call for help. It can also allow them to see the closest place they can swim to and get to safety.

Healy also recommends that parents outfit their young children, especially those who are weak swimmers, with life jackets. He also strongly recommended against inflatable armbands, which he says can slip off a child’s arms.

For all adults near water where children are swimming, Healy said they should know how to tell when a child is struggling in the water.

“The signs of drowning are not as big, or as exaggerated, as you see on TV or in movies,” Healy said.

According to Healy, with small children they tend to be in a vertical body position at the water level or just beneath it.

When in trouble you may also see the child’s head title back as they gasp for air, but are instead taking in water.

Other signs include seeing a child’s body go limp in the water, their eyes wide open and their mouth open when underwater.

Finally, seeing a child floating facedown is a sign that they have fallen unconscious.

“It’s actually a very quiet process, it’s a very inconspicuous process especially at busy pools because you won’t see the kicking, the pulling, the splashing,” he said.

A child in distress, Healy said, can fall under the water in as little as 20 seconds.

Healy also said for parents who themselves may not know how to swim, don’t be embarrassed to learn how to swim themselves, even if they don’t want to take a class.

“There’s a lot that they can learn just by coming and watching their child swim, or enrolling in a baby class or even just asking their child what are you learning,” he said. 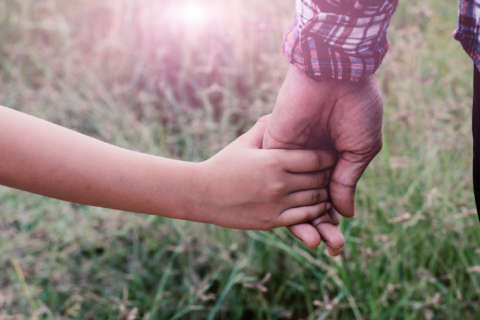