Another round of precipitation that will cause nearly a quarter-inch of ice to glaze the D.C. area is in the forecast. Here's what you need to know.
Listen now to WTOP News WTOP.com | Alexa | Google Home | WTOP App | 103.5 FM

Another round of precipitation is causing ice to glaze the D.C. area. Here’s what you need to know.

The National Weather Service issued a winter weather advisory until 7 a.m. Sunday for much of the D.C. region.

But an ice storm warning was ended around 9 p.m. Saturday night, with most of the precipitation in the Capital metro area having tapered off earlier in the afternoon.

Still, the freezing rain, with some sleet and snow mixed in as well, fell throughout most of the daylight hours on Saturday, so people should prepare for the ice to start hardening and be mindful of slick surfaces through the night.

The freezing rain will taper off to drizzle Saturday evening, but it will stay icy overnight as temperatures remain below freezing.

WTOP’s Ken Duffy said in Bethesda and Chevy Chase, Maryland, that conditions continue to worsen as salt trucks move through the area to combat the ice.

“We had freezing rain to start and now it’s just straight up ice pellets falling on the ground,” Duffy said. “These roads are very dangerous right now.” 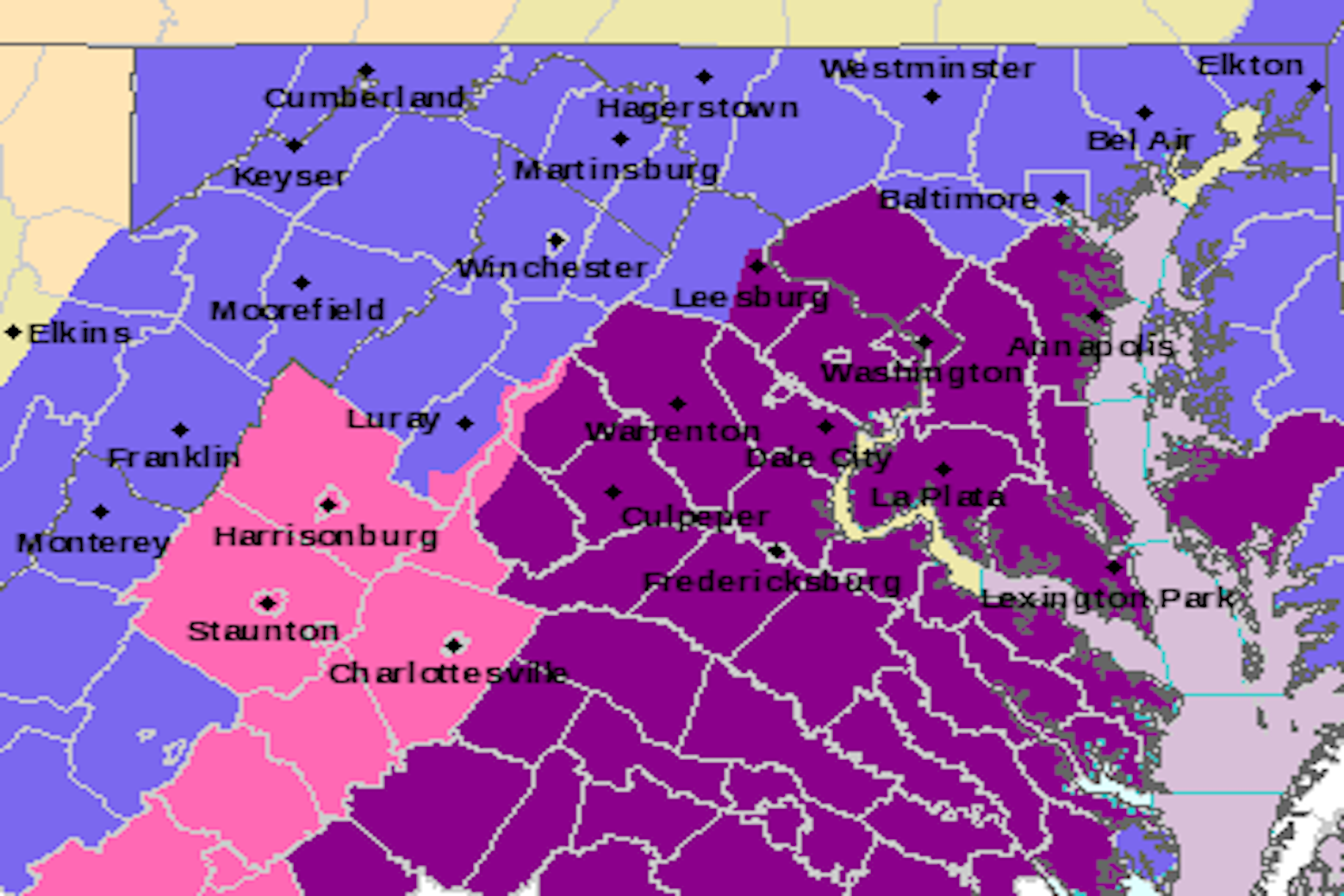 Temperatures are going to be below freezing for most of the area Saturday.

Coronavirus vaccination appointments have been canceled for the remainder of Saturday at the Six Flags America location in Prince George’s County, according to the Maryland Department of Health. Those whose appointments were canceled will be automatically scheduled for March 2 at the same time of day and will get a confirmation message.

WTOP’s Dick Uliano said around noon that it was quite slick in the D.C. area. In a Giant Food parking lot in Bethesda, Maryland, he said that the first step out of the car is slippery.

In Arlington, Virginia, the 10th Street bridge and the Courthouse Road bridge of Route 50 have been closed because of icy conditions.

“The mix of any snow and/or sleet will change to mainly freezing rain for the afternoon,” said Storm Team4 meteorologist Lauryn Ricketts.

“All spots will have treacherous driving conditions because of the icy glaze, but the areas in the Ice Storm Warning will have enough ice buildup to cause added concern for falling tree branches and power outages,” said Storm Team4 meteorologist Matt Ritter.

Ice has already wreaked havoc on local drivers throughout the daytime hours on Saturday.

The Virginia State Police said that there have been 83 crashes and 29 disabled vehicles reported in its Fairfax Division — which covers Fairfax, Loudoun, Prince William and Arlington counties — and 37 crashes and 8 disabled vehicles in its Culpeper Division — which covers Fauquier, Stafford and Spotsylvania counties, as well as major cities such as Fredericksburg and Winchester.

On the other side of the Potomac, Maryland State Police said they had responded to 57 crashes by 4 p.m. on Saturday

Metrobus said that it is curtailing its evening service as of 6 p.m. Saturday and will limit its routes to major roads only.

Riders should be aware that Metrobus may suspend all service if icy conditions worsen. For Sunday, Feb. 14, buses plan to run on a moderate snow service plan.

Despite scheduled closures at the Addison Road, Arlington Cemetery, Franconia-Springfield, and Van Dorn Street stations, Metrorail plans to run its normal weekend schedule during the ice storm, with de-icer trains and heaters used to keep ice from building up on the third rail.

Dominion Energy has also reported that the ice storm has caused power outages for 130,000 Virginians, and the Rappahannock Electric Cooperative reported 8,200 customer outages due to the ice.

The region most impacted will be south and east of D.C. where there could be accumulations of ice around a quarter of an inch or slightly more.

The accumulation of ice on power lines and tree branches could lead to some power outages.

Saturday’s storm will deliver likely ice accumulation of more than a quarter-inch, according to Storm Team4 meteorologist Chuck Bell.

“Cold, subfreezing air will be stuck here at the surface as moist air from the Gulf Coast and South runs up over the top of it,” Bell said.

Bell added that untreated surfaces, such as roads, sidewalks and handrails “will be glazed with ice and extremely slippery.”

The storm will pull away by Sunday afternoon and most of the D.C. area will be able to get at least a few degrees above freezing, “that will be critical for improving travel conditions,” Bell said.

Another winter storm, which he called a “high-impact event,” will deliver more snow and less freezing rain when it arrives Monday night into Tuesday.

Another storm “which should have more rain and less snow arrives on Thursday,” Bell said.