Officials across D.C., Maryland and Virginia are reacting after Democrat Joe Biden clinched the White House with a victory in Pennsylvania on Saturday.

Maryland Gov. Larry Hogan (R) tweeted his congratulations to the president-elect, saying all Americans “should want our president to succeed because we need our country to succeed.”

Congratulations to President-elect Biden. Everyone should want our president to succeed because we need our country to succeed. We have great challenges ahead of us as a country. Now more than ever, we need to come together as Americans.

Virginia Gov. Ralph Northam (D) tweeted his congratulations to Biden and running mate Kamala Harris too. Northam said now is the time for Americans “to come together as a nation.”

Congratulations to President-elect Joe Biden and Vice President-elect Kamala Harris. It’s time to come together as a nation to address our challenges and move our country forward. I am looking forward to working with you!

Bowser called their victory a “shared one.”  Adding that “activism matters,” “organizing matters,” and “elections matter.”

Sen. Tim Kaine (D-Va.) said on Twitter that Biden will “restore competence, compassion, and character to the White House.”

Joe Biden is going to restore competence, compassion, and character to the White House when he is inaugurated in January—and that’s a win for ALL Americans. Congrats to Joe, Kamala, and everyone who has been fighting hard for this critical step forward for our nation.

Sen. Chris Van Hollen (D-Md.) said in a statement that the nation “faces enormous challenges” but the U.S. has elected “two seasoned leaders” in Biden and Harris.

Former Virginia Gov. Terry McAuliffe said that “Today there is sunshine across America as we congratulate our President-Elect and Vice President-elect Joe Biden and Kamala Harris,” in a statement.

He statement continued by saying that “I know that my friend Joe Biden will be a President for all Americans,” before saying that he will make improvements to healthcare, the economy and education and he will “fulfill the promise of our democracy that Donald Trump has threatened.”

U.S. Congressman Don Beyer, Jr. (D-Va.) congratulated Biden and Harris in his own statement as well.

U.S. Congresswoman Jennifer Wexton (D-Va.) also expressed her well wishes to Biden and Harris, saying in a tweet that “I look forward to working together to get this virus under control, revive our economy, improve our health care system, and rebuild our federal civil service.”

What a DAY, DC!! I am so proud. 💙 pic.twitter.com/btcYOvYqDG 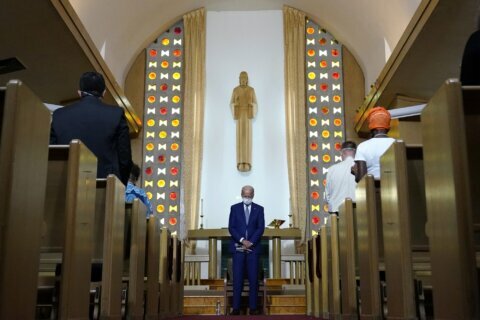