Crews cleaning up several tons of oil tar balls and other debris along the Delmarva coast after a mysterious spill two weeks ago, are close to finishing the massive cleanup operation, according to U.S. Coast Guard and Delaware state officials.
Listen now to WTOP News WTOP.com | Alexa | Google Home | WTOP App | 103.5 FM
(1/4) 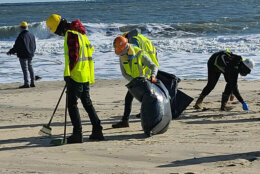 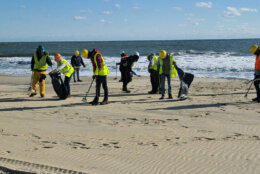 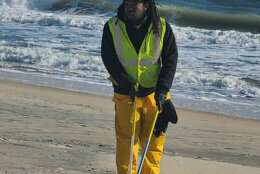 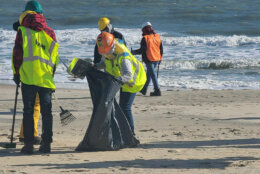 Crews cleaning up several tons of tar balls and other oily debris along the Delmarva coast after a mysterious spill two weeks ago are close to finishing the massive task, according to U.S. Coast Guard and Delaware state officials.

“We have good reason to believe from our on-scene monitoring that the clearance of oil and cleanup efforts of oily debris from the beaches are largely complete,” said Shawn Garvin, secretary of the Delaware Department of Natural Resources and Environmental Control, in a news release Monday.

The cleanup effort is being spearheaded by a unified command, made up of state officials and the U.S. Coast Guard.

So far, crews have collected more than 75 tons of oiled debris and tar balls from the beaches.

“This last step of the process requires a great deal of coordination and communication from all agencies serving in the Unified Command,” said Coast Guard Lt. Cmdr. Fredrick Pugh, federal incident commander for the response. “At the end of the day, every person associated with this response effort is striving for the best possible outcome for affected areas and their residents. With that in common, we will make intelligent determinations, zone by zone, that prioritize human safety, protection of wildlife and preservation of the environment.”

Crews have worked for more than a week on the cleanup, including over the weekend, picking up debris in north Ocean City.

Beaches in Lewes, Dewey Beach and Bethany Beach were temporarily closed because of the blackish oil patties.

The oil debris has also shown up at other beaches.

Rehoboth Beach in Delaware and Ocean City in Maryland both warned people to watch where they or their pets walked on the beach.

“Please use caution and/or refrain from allowing your pets to swim in the water, and stay away from the shoreline, as oil debris and tar balls are found along the water’s edge from high tides,” an Ocean City Facebook post said last week.

In Ocean City, there were six cleanup crews working the beach Monday, said Jessica Waters, a communication manager for the resort town, in an email to WTOP.

Of the cleanup effort, Waters said, “We are rounding the corner as conditions continue to improve.”

The spill was first noticed Oct. 19 along Delaware’s Broadkill Beach, and its origin is still unknown.

The spill spanned 60 miles between Bowers Beach and Ocean City, and has prompted the Delaware Audubon Society to offer a $1,000 reward for information that an anonymous donor will match, according to WDEL.

A Coast Guard laboratory is analyzing the oil in hopes of developing what’s known as a “petroleum fingerprint” that could identify its source. If a source is identified, the responsible party would be required to reimburse the federal government for the cleanup operation, authorities said.

As cleanup ends on individual beaches over the next several days, you may see small spots of oil or isolated bits of debris. However, any large portions of oil or oily debris on the sand or in the water should be reported.

People who see oil patties and oiled wildlife are still being urged to call Delaware’s environmental hotline at 800-662-8802 or the Maryland Department of the Environment at 866-633-4686.