Storms battered the D.C. region leading to flooding and road damages in some areas. But the risk of flooding returns Thursday through the weekend. Here's what you need to know.
Listen now to WTOP News WTOP.com | Alexa | Google Home | WTOP App | 103.5 FM
(1/4) 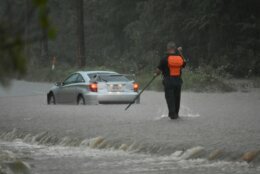 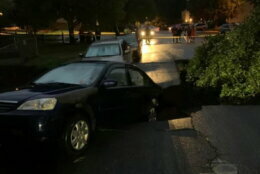 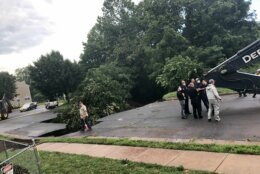 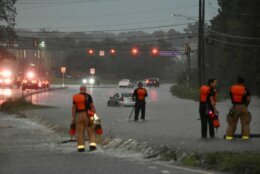 Storms battered the D.C. region leading to flooding and road damages in some areas. But the risk of flooding returns Thursday through the weekend. Here’s what you need to know.

Torrential rain from slow, erratic-moving thunderstorms that moved across the area triggered a string of flash flood warnings for several Maryland and Virginia counties, all of which expired early.

However, a flash flood watch for southern Maryland, including Calvert, Charles and St. Mary’s counties, is in effect until 8 a.m. Thursday.

Tones rang in Historic Ellicott City, as the Howard County government issued a flash flood warning for the city until 8:45 p.m. Wednesday. The tone alert system was activated and was sounded several times.

Water never overflowed the banks of the Tiber Creek, which snakes along and under Main Street.

There is no reported damage on Main Street or injuries and water rescues, but Hinson said there are some concerns about pre-dawn storms that are expected.

Flash flood with driver stranded on Church Road in Sterling and cabin branch out of its banks pic.twitter.com/9JDotrdIKl

Early morning thunderstorms brought a quick 3 inches of rain to the Manassas area of Northern Virginia on Wednesday, leading to high standing water on roadways and even a sinkhole that cut off a residential neighborhood.

Storms dumped between 2 and 4 inches of rain in the span of an hour overnight from Manassas to Fairfax, with the highest amounts between Interstate 66 and Centreville Road around the Manassas Park Community Center.

Virginia State Police reported high water on U.S. 29/Lee Highway from I-66 through the Manassas National Battlefield Park, with water rescues between Groveton and Sudley roads. A caller to the WTOP Traffic Center saw at least four vehicles in distress.

A large sinkhole on Moseby Drive left hundreds trapped in their neighborhood, according to Manassas Park police spokesman Frank Winston. Photos from law enforcement showed at least one car leaning into a fissure that had opened along a creek under the roadway.

WTOP’s Neal Augenstein reported there were no injuries and that crews were on scene attempting to establish another route out of the Moseby Ridge subdivision.

Thursday will be cooler, but the afternoon forecast will be similar to Wednesday’s. Some areas of rain are possible Thursday morning, not just during the afternoon.

More downpours and storms are in the forecast later Friday, with the chance for some storms over the weekend as the air remains muggy.

Wednesday night: Heavy rain possible before midnight.Lows in the 70s.

Thursday:Showers and storms possible through the day, cloudy. Highs in the upper 80s.

Saturday: Partly sunny and muggy. Chance of afternoon storms. High in the low to mid 80s.

Commuter Connections wants you to commit to a car free Tuesday

Hilton ranked No. 1 in Fortune’s ‘Best Workplaces for Women’