A potential new name for Washington's football team is the "Washington Red Wolves," and it is gaining support online not only from fans but from wildlife conservation groups.
Listen now to WTOP News WTOP.com | Alexa | Google Home | WTOP App | 103.5 FM

A potential new name for Washington’s football team is the “Washington Red Wolves,” and it is gaining support online not only from fans but from wildlife conservation groups.

“It sounds like there’s some good momentum,” said Ron Sutherland, chief scientist for the conservation group Wildlands Network in North Carolina, the only state where the red wolf still exists in the wild.

The red wolf is an endangered species, and some advocates have said that naming an NFL team after the animal would boost efforts to save it.

“The conservation community is pretty excited by the idea,” said Sutherland. “We know that it would bring some recognition to the red wolf program.”

According to the U.S. Fish and Wildlife Service, there are only about 40 of the wolves in the wild today. More than 200 others live in breeding facilities around the country.

In 1980, red wolves were declared extinct in the wild, but some of them survived.

“In terms of the wild population, the red wolf is the most critically endangered rare species that I can think of,” Sutherland said, noting that he believes the number in the wild is lower than 40.

As of Wednesday morning, nearly 8,000 people had signed an online petition, calling for Washington to rename its football team the “Red Wolves.”

Fan speculation has been rampant ever since the team announced it would change its longtime controversial name that was considered by many to be a racial slur against Native Americans.

Along with arguably the most polarizing name in North American professional sports, the team said it would also drop its Indian head logo, bowing to recent pressure from sponsors and decades of criticism.

Some, though, say red wolves would bring up Native American imagery and perpetuate stereotypes.

ESPN’s Kevin Blackistone, who also teaches at the University of Maryland, told WTOP he believes the team needs to get away from anything red.

Blackistone is one of the co-producers of a documentary in production called “Imagining the Indian” about the movement to eradicate Native American names, logos and mascots in the world of sports and beyond.

It remains unclear how soon the team will announce a new name and logo.

Other names that have been floated by fans as possible new names have included the Redtails, Warriors and Monuments. 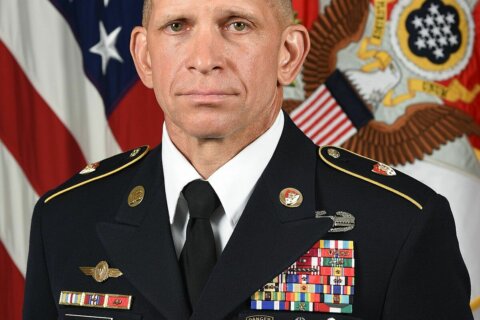