Two of the historic locks on the C&O Canal in Georgetown have been restored, which is a major step toward a return of the mule-drawn canal boat.
Listen now to WTOP News WTOP.com | Alexa | Google Home | WTOP App | 103.5 FM

One of Georgetown’s best-loved tourist attractions — a mule-drawn canal boat traversing the C&O Canal — is one large step closer to returning after the restoration of Locks 3 and 4 in the heart of the city.

When the locks and canal were built, between 1829 and 1831, they were an integral part of doing business.

“They needed a way to move cargo, goods and people upstream and downstream on the river,” said Joe Reed, park civil engineer for the National Park Service. “It was operational for navigation until the 1900s,” powered by mules.

The NPS and Georgetown Heritage, a nonprofit which sprouted from the Georgetown Business Improvement District, along with the District of Columbia, have been working to revitalize the first mile of the Chesapeake & Ohio National Historical Park in Georgetown. The Park Service maintains the 184-mile canal all the way to Cumberland, Maryland. 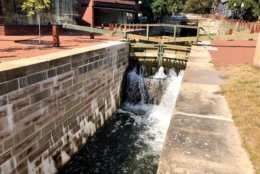 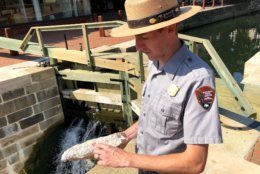 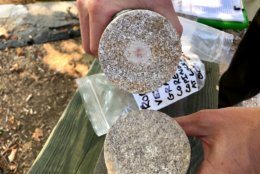 The historic canal boat, the Georgetown, which has been largely retired since 2011, took one final mule-pulled ride on the canal in 2016 before the Park Service began its first stages of restoration.

The NPS determined Lock 3 wasn’t stable after years of use. “We actually took it down to the historic foundation, that hasn’t been seen for 188-plus years, found the historic timbers in the foundation that had failed and replaced it with a concrete foundation,” said Reed.

To get down to the foundation, crews had to use cranes to remove and try to preserve the historic Aquia Creek sandstones that lined the canal.

“They went through and numbered every single stone, measured them, cataloged them and cleaned them,” said Reed. “If you came through here a year ago, you would have seen mountains and mountains of pallets of stones.”

As for the wooden gates, they’re constructed from southern yellow pine.

“We just added the water, and away we go, back to trying to restore the historic character of the canal,” Reed said.

Nearby, the District’s Department of Transportation is working to replace the aging vehicle bridge over 31st Street Northwest. That project requires ensuring a portion of water in the canal continues to flow to the newly restored gates.

Now, with the locks ready for use, Georgetown Heritage will continue restoring the historic experience for visitors.

“The boat will be returning sometime in the next year or two,” Reed said. “And the mules will be coming back as well.”