DC ranks No. 1 in US for most expensive infant child care

An updated report from the Economic Policy Institute shows the average cost of full-time, center-based infant care in the District is $24,243 a year, or $2,020 per month — nearly $7,000 more than D.C.’s estimated annual cost of housing and more than 28% of the median income for local families with children.
Listen now to WTOP News WTOP.com | Alexa | Google Home | WTOP App | 103.5 FM

D.C. parents are paying more for infant child care than their counterparts throughout the U.S.

An updated report from the Economic Policy Institute shows the average cost of full-time, center-based infant care in the District is $24,243 a year, or $2,020 per month — nearly $7,000 more than D.C.’s estimated annual cost of housing. The cost of care takes up more than 28% of the median income for local families with children.

“It is just simply out of reach for many families to be able to afford those kinds of costs,” said Elise Gould, a senior economist at the Economic Policy Institute (EPI), a nonprofit, nonpartisan think tank.

There are a number of factors that drive up the cost of care. Two of the biggest are rent, which Gould said is “expensive in D.C.,” and labor.

It’s not that child care providers are paid high wages — a report published by DC Appleseed shows child care is one of the lowest paying professional fields — but low teacher-to-child ratio requirements means centers have to staff several care providers and for hours that exceed the traditional workday. (It’s not uncommon for day care centers to open at 7:30 a.m. and close after 6 p.m. to allow parents to get to and from work.)

There are subsidies for low-income families to access child care, but Gould said the system is underfunded, and there are often long wait lists.

“Even middle-income families have a really hard time paying the costs to get that child care for their children,” she said, adding that when parents don’t have affordable child care options, one is often forced to leave the workforce. Single parents are left with even fewer choices.

In recent years, several states, including D.C., have expanded public school options to include 3- and 4-year-olds in universal pre-K programs. This model helps to prepare children for kindergarten, while reducing the child care cost burden on parents.

But still, Gould said more needs to be done.

D.C., Maryland and Virginia are three of 33 states where infant child care is more expensive than college tuition.

Editor’s Note: This article has been updated to clarify the cost of care compared to median income. 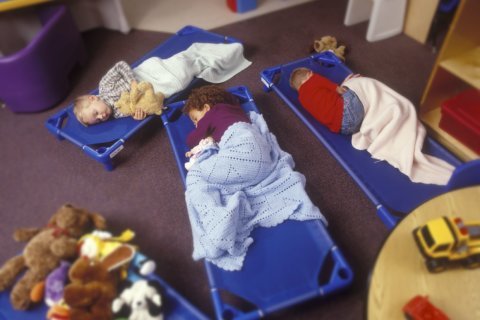 Not just a safe place: Why quality child care matters