Ducking out of the office early to start the Fourth of July? You could run into some strong storms during your drive.
Listen now to WTOP News WTOP.com | Alexa | Google Home | WTOP App | 103.5 FM

Ducking out of the office early to start the Fourth of July? You could run into some strong storms during your drive.

The highs for Wednesday were in the low to mid-90s, but the humidity and heat index made it feel like 100 degrees. Severe storms are most likely between 3 p.m. and 9 p.m.

Storm Team4 meteorologist Amelia Draper said if you want to avoid the pre-July 4 deluge during your exodus, leave earlier.

These storms could bring damaging winds, heavy downpours (which could cause flooding) and even small hail. Chances of storms Wednesday afternoon are at about 60%, according to Storm Team4 Meteorologist Lauryn Ricketts.

The National Weather Service warned that gusting winds would be the biggest threat in any afternoon storms.

Hot and humid conditions today with showers and thunderstorms expected later this afternoon and into this evening. Some storms could be strong to severe, with damaging wind gusts the primary threat. Latest: https://t.co/5RyZgoXicj #DCwx #MDwx #VAwx #WVwx pic.twitter.com/M4wtELIfS0

Showers may linger into the evening but the area will dry out overnight, with temperatures in the 70s. Areas that get a lot of rain can expect some fog, so late-night drivers should proceed with caution.

Things could get dicey tonight at the @RollingStones concert #FedExField. @nbcwashington is on #TheScene this evening alerting you to possible storms moving in after 3pm. These could be strong/severe with lightning, heavy downpours & strong winds. pic.twitter.com/YJ5EyK88Gn

Wednesday is a weather alert day, Storm Team4 meteorologist Steve Prinzivalli said, with the threat of late-day storms that could be severe and have gusty winds.

Wednesday: Partly cloudy, hot and muggy. Scattered afternoon storms could be severe. Highs in the low to mid-90s. Heat index near 100.

Thursday, July 4: Clouds with some sun, hot and muggy. Scattered thunderstorms in the afternoon. Highs near 90 degrees.

Friday: Hot and muggy with limited sun and the risk of late-day storms. Highs in the low 90s.

Storm damages were reported Tuesday night in Montgomery and Prince George’s counties in Maryland, and in Loudoun, Prince William, Fauquier and Fairfax counties in Virginia. 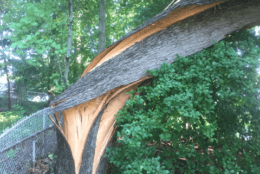 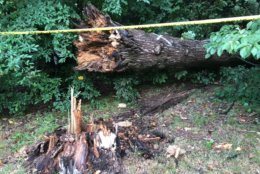 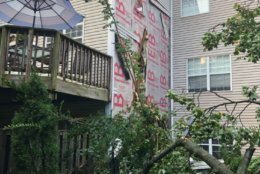 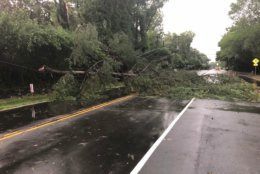 @TownofLeesburg Tree down on St James on Cornwall in Leesburg #Leesburg pic.twitter.com/bIkY4GNAeJ

For the latest traffic conditions, go to the WTOP Traffic page.

The storm left a wake of outages throughout the region. In Northern Virginia, more than 7,500 Dominion Energy customers lost power. As of Wednesday afternoon, over 2,000 in Fairfax were still without electricity.

In Maryland’s Montgomery County, almost 200 Pepco customers are without power.

Below are the latest power outage numbers.