There's going to be a flyover of World War II vintage aircraft in the D.C. area Friday, May 10 as part of a commemoration of the 75th anniversary of the D-Day invasion.
Listen now to WTOP News WTOP.com | Alexa | Google Home | WTOP App | 103.5 FM
(1/7) 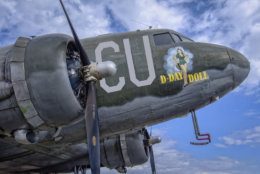 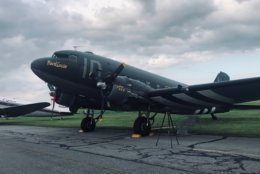 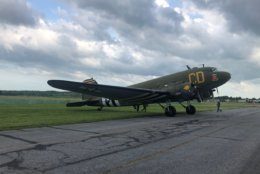 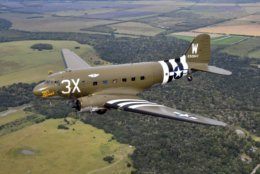 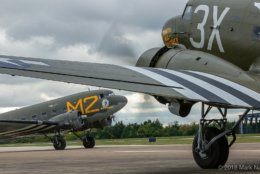 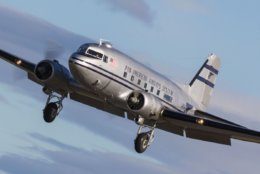 Share on Facebook. Share on Twitter. Share via email. Print.
Weather allowing, there’s going to be a flyover of World War II vintage aircraft in the D.C. area Friday, May 10 as part of a commemoration of the 75th anniversary of the D-Day invasion.

The D-Day Squadron of seven World War II planes will honor veterans by flying over Arlington National Cemetery after taking off from the Frederick Municipal Airport in Frederick, Maryland, at about 11:30 a.m. They’re expected in the Arlington area at about noon.

The planes will pass over near Manassas and Woodbridge in Virginia; Clinton and Oxon Hill in Maryland; and then over the Pentagon and Arlington National Cemetery in Arlington, Virginia. The formation will then fly northwest up the Potomac River back to Frederick. The planes will be flying at 2,500 feet above Mean Sea Level.

You can see some of the planes participating in the Pentagon flyover on the ground and in action at the Aircraft Owners and Pilots Association (AOPA) 80th Anniversary two day “Fly-In” event in Frederick on May 10 and May 11. The event

The planes participating in the flyover will include six C-47 “Dakota” transport planes, known as DC-3s commercially and one T-6 “Texan.”

The specific planes that will be at AOPA’s event are the Placid Lassie, Miss Virginia, Flabob Express, Betsy’s Biscuit Bomber, Clipper Tabitha May and Virginia Ann.

“These are the aircraft that people would recognize that were the jump aircraft, the parachute aircraft that were part of the D-Day in invasion in 1944, as well as all manner of WW II operations,” said Chris Eads, AOPA’s Senior Director of Outreach and Events.

After the weekend’s visit, the D-Day Squadron will be flying to New York before crossing the Atlantic to Normandy, France, for the June 6 D-Day anniversary.

Meet the planes up close in Maryland

The vintage planes and about 40 or 50 more modern planes will be on display. You can get up close and personal with the planes, meet their flight crews and in some cases even climb inside and sit in the cockpit. There’ll be about 500 smaller planes on hand that are coming from around the region being flown in by Fly-In attendees.

There will be two opportunities to see the vintage aircraft in the air at the Fly-In event. The planes will perform two demonstrations, including parachute jump re-enactment if the weather cooperates.

“There’ll be folks who are in World War II period attire, they’re going to do demonstration jumps, so we can see how that all looked back in the 1940s,” Eads said.

Friday evening’s showcase will also include demonstrations of how planes pick up the banners, such as the ones you see flying at the beach. About a dozen planes will do short take offs and landings to show off the skills of backcountry pilots on very short runways.

“Then we’ll wrap up the evening, once it gets dark with a night drone show,” Eads said. “About 80 to 100 drones will be doing this really beautiful choreographed display.”

All the events are free, but if you want to join the “Flightline Cookout” for dinner, you’ll need to buy tickets in advance. It’s $20 for adults, $10 for kids 12 and under. Ticket availability on Friday isn’t guaranteed. On the menu at the cookout: all you can eat hot dogs, hamburgers, side dishes and a couple adult beverages.

EDITOR’S NOTE: This story has been corrected to reflect how many planes will participate in the flyover.