After a brief taste of springlike weather, the region is once again in the path of a — thankfully small — bout of winter weather. Here's what you need to know about the likely snow shower.
Listen now to WTOP News WTOP.com | Alexa | Google Home | WTOP App | 103.5 FM

Those hoping to have brushed off winter’s bitter embrace for the season will have to deal with at least one more hurdle: Snow, again. Even if it isn’t much.

A chance of a brief snow shower is — unfortunately — in the forecast, but anyone out late celebrating St. Patrick’s Day doesn’t have to worry. NBC Washington Meteorologist Somara Theodore said any snow most likely won’t arrive until early Monday morning.

“It will impact the entire region, but areas north of Washington D.C. have the greater chance at seeing some snow on grassy surfaces,” Theodore said.

What snow does fall will be little more than a light dusting, and there’s only a small chance of accumulation. There will be almost no accumulation on roads and overall, the snow should not interrupt the Monday morning commute.

Still, Theodore reminded commuters to give themselves some extra time Monday morning. Although the snow isn’t expected to stick, the roads may still be slick

The National Weather Service provided this graphic representing snow chances around the region: 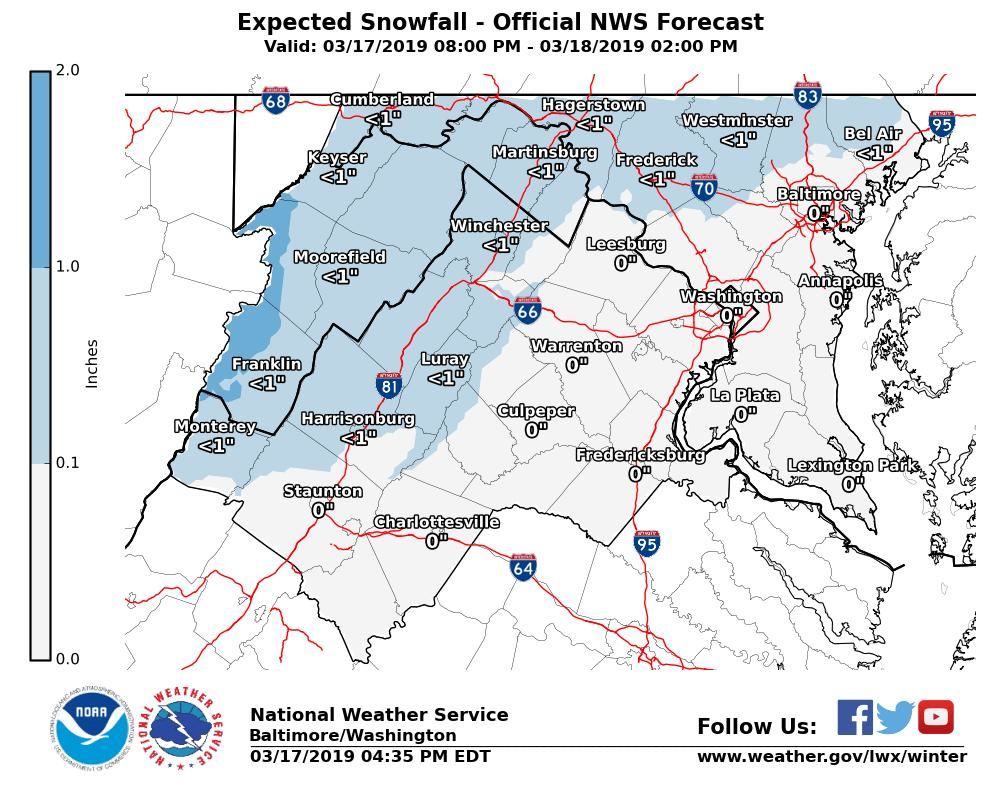 What may start as a light snow in the D.C. metro area will shift into a mix of sleet and rain by the late morning, then everything switches to rain by lunchtime. The day is expected to dry out in the late afternoon, evening.

Now for the good news: The week after is looking sunny and seasonably nice. Temperatures will hover around the 50s with only a few days dropping into the upper 40s.