Oyster shell recycling: Bay to table and back again

It's a smelly job, but collecting oyster shell from area restaurants for recycling helps restore oyster populations -- and gives the restaurants a tax break. Ride along with a collector.

ANNAPOLIS, Md. — At 7:30 a.m., outside of the Oyster Recovery Partnership office and by the trunk of his 2008 Toyota Corolla, Wayne Witzke traded his slides for a pair of brown rubber boots.

The bearded man hopped into a Ford F-550, fired up the truck — covered with oyster-camouflage — and shifted it into gear. Time to pick up smelly barrels of shells from roughly 30 restaurants in Annapolis.

Witzke works for the Shell Recycling Alliance, an Oyster Recovery Partnership program that collects discarded shell from restaurants and seafood distributors in Maryland, D.C. and Virginia.

Witzke grew up near Salisbury, Maryland, “always going to tributaries of the bay, specifically the Nanticoke and living near the Wicomico,” he said. “I’ve always gotten to see how life on the bay is.”

“We’ve also had moments where we can’t necessarily go swimming in some of those tributaries because of bacteria and other things,” he said. “Loving to fish and crab and even eat some of the seafood that we get from it has opened my eyes to the plight of the bay and how, consequently, there are efforts out there to bring it back.”

While Witzke picks up, transports and unloads shell, he keeps the bigger picture in mind.

“Sure I’m just dumping the shells,” he said, “but each one will become a home for 10 baby oysters.”

“It comes down to believing in the mission,” he added. 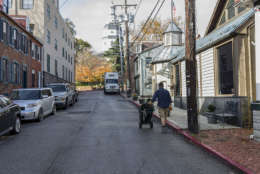 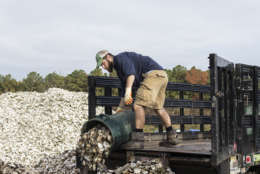 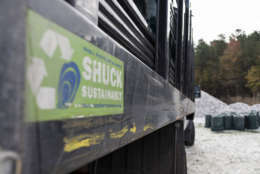 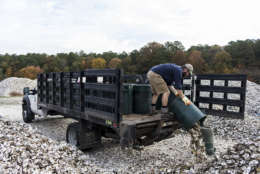 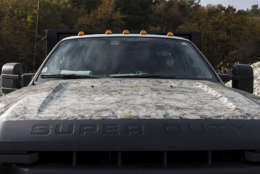 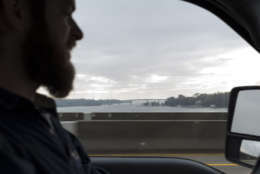 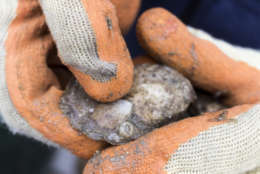 Some of the shells are used for the Marylanders Grow Oysters program, which equips waterfront households with cages of oysters to hang from their docks.

The effort protects baby oysters in their most vulnerable stages. After a year, the homeowners return the oysters, which are planted in oyster sanctuaries to improve water quality, among other benefits.

The shell Witzke and his colleagues recycle is delivered to the University of Maryland Center for Environmental Science Horn Point Oyster Hatchery in Cambridge, Maryland.

It is aged for a year “to get rid of any organic material,” washed with high-pressure hoses and placed in metal cages containers, hatchery manager Stephanie Alexander told the University of Maryland’s Capital News Service.

The containers of shell are then added to outdoor setting tanks. The larvae are introduced to the tank and regulated closely by hatchery staff members, who take samples to measure how many attached to shells, Alexander said.

“If the numbers look good,” she said, “we’ll go ahead and turn the water on” and then schedule planting. The tanks are connected by an elaborate network of pipes, which pump phytoplankton-rich river water through the cages, providing a food source for the young bivalves.

Ready for deployment, the spat — baby oysters once they’ve attached to shell — are loaded onto a vessel and dumped onto oyster beds in the country’s largest oyster restoration project in and around the Choptank River.

Shell recycled by the alliance accounts for about a third of hatchery operations’ total demand of about 100,000 bushels per year, according to Tom Price, operations manager of the Shell Recycling Alliance.

The shell recycling program began in 2010 with 22 restaurants. Today, the alliance boasts more than 336 members regionwide and counting, Price said.

This year, Price said, the alliance is on track to collect 34,000 bushels, with its grand total set to eclipse 140,000 bushels since the program’s inception in 2010.

On Nov. 9 — as he does almost every Thursday — Witzke set off to pick up shell from restaurants on the alliance’s Annapolis route. He’s refined his collection practice down to labeling certain cans with zip ties, and has developed a walking route among the downtown restaurants. Each time he picks up a restaurant’s container of shell, he replaces it with a fresh can.

The aroma of a full can of old shucked oyster shells is nauseating. The containers stored inside are bad; the ones stored outside — open to the elements and subject to filling with water — are noxious.

Witzke’s used to it, though, and didn’t skip a beat.

Cans with zip-ties have holes in them to let water drain as they sit outside of restaurants. Witzke knows he can’t use those cans for restaurants that store shell indoors, because the rancid liquid inside would drip out.

As he approached the first, and newest, stop — Azure, at the Park Place Plaza — Witzke squeezed the truck beside two moving vans, grabbed a rope he uses to drag full cans and took off into a dark loading dock.

The three-year shell recycling veteran has also noticed trends. Some restaurants, the “dink and dunks” as Witzke calls them, produce little shell, while others, the “heavy hitters,” consistently have multiple cans to recycle.

His downtown Annapolis route, which he does on foot, pulling cans on a dolly, began at the Market House by Ego Alley on the town’s renowned waterfront. He picked up at popular restaurants such as Middleton Tavern and McGarvey’s Saloon & Oyster Bar, then headed toward the State House and Galway Bay Irish Restaurant and Pub, on Maryland Avenue.

To get to Galway Bay’s cooler, Witzke had to maneuver through an elaborate and narrow alley system. On this particular Thursday, the Irish pub, which prides itself on reducing waste, produced little more than a bucket of shell.

“It’s our mission to be good stewards of our planet,” said Gary Brown, assistant general manager at Galway Bay. Brown found out about the recycling alliance at a festival. The Recovery Partnership attends many festivals to spread the word about the program.

“I spoke with one of the ladies from the recovery partnership and decided to say, ‘Hey, we’re going through all these oysters and there’s no way to recycle them,’” Brown said.

“It’s been a bit of a learning curve,” Brown said, “because they smell.”

If they leave the oysters outside, Brown added, they’ll attract flies, maggots and rodents, “which obviously as a restaurant we don’t want.”

So Galway Bay settled on buckets with a screw-on lid to negate the smell.

It’s not only about environmental stewardship for restaurants. The initiative provides free waste removal — the recycling alliance picks up their shell for free — and a tax break.

Each time they pick up shell from a restaurant, Witzke and the alliance record the total. At the end of the year, the alliance adds up the number of bushels collected from each restaurant, creates a certificate and delivers it to the restaurant. For up to 150 bushels, the restaurant can earn $5 per bushel against its state income tax.

After loading the shell from the Irish pub onto his dolly, Witzke wheeled the oysters back to the truck. On to the heavy hitters in the Eastport neighborhood.

Boatyard Bar & Grill recycled the most shell Nov. 9, with more than six cans.

“We sell a huge amount of oysters,” said Dick Franyo, the owner of Boatyard, who outlined his restaurant’s “Buck to Shuck” promotion, which offers $1 oysters at happy hour and on Sundays.

Franyo, a self-proclaimed “bay rat,” said he grew up fishing and sailing around the bay. As such, he’s grown to understand the importance of cleaning it — and the oysters’ impact on the estuary.

“If you’re in the Chesapeake Bay region, your business is driven by the health of the bay,” he said. “People come here to eat local” oysters, crabs and rockfish (striped bass).

He added: “So goes the health of the bay, so goes our business.”

To get to the back of Boatyard, Witzke had to reverse the bulky truck down a narrow alley. “All the other trucks scrape the walls,” Franyo said.

Witzke then retrieved the cans from an outdoor closet attached to the restaurant. The room was packed with full cans stacked on top of each other. He had to heft the heavy cans onto the ground before dragging them to the back of the truck. At the truck, Witzke heaved four cans onto a hydraulic lift, repeating until he’d collected all of them.

By about 1 p.m., Witzke had collected all of his shell. He got back on the road and headed for the Bay Bridge.

“This is the part of the job that drives me nuts,” he said, pointing to the pickup truck in front of him on Eastbound Route 50, “sitting in traffic behind someone that’s just moseying along. …

“I just want to dump or pick up my shell.”

Upon arriving at the Grasonville Solid Waste Transfer Station, in Queen Anne’s County, Witzke steered the truck to the back corner of the facility. He turned and reversed toward the alliance’s mountainous shell piles.

As Witzke exited the truck, the rancid smell of rotting seafood was startling.

Witze stacked each of the empty cans left at the transfer station from the previous trip. He maintains a rotation, giving the cans a few days to air out before exchanging them for full containers at restaurants.

Witzke swung open the Ford’s rear corral gates and slid containers to the edge of the truck bed before tipping them over, one at a time, pouring the contents onto the shell pile.

It had rained overnight and many of the cans had filled with water. Each time he turned over a container of shells, water splashed up.

And each time, the pungent smell of rotten seafood slush pierced the air.

After about an hour, Witzke had cleared the truck bed and switched out the cans. Time to head back to the Annapolis office, a long day of smelly work on the books.

He climbed into the truck, leaving the putrid smell behind, and turned the ignition.

“Does the AC smell weird to you?”