WTOP asked residents of both Maryland and Virginia to weigh in on his accomplishments and give their opinion 100 days into his presidency.
Listen now to WTOP News WTOP.com | Alexa | Google Home | WTOP App | 103.5 FM

WASHINGTON — Coming up on 100 days in office, we asked voters in Maryland and Virginia how they feel about President Trump’s accomplishments thus far. 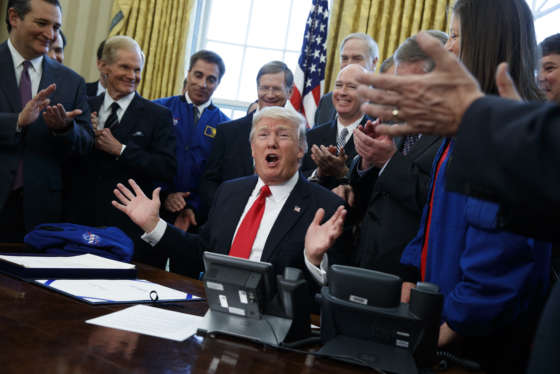 Some of the memorable images during President Donald Trump’s first 100 days in office.

WTOP asked residents of both Maryland and Virginia to weigh in on his accomplishments and give their opinion 100 days into his presidency.

“From Day One, I think he’s been terrible. Mainly because he brought a lot of baggage into the White House with him with the issues of his tax returns and the Russia connection, his family business and interests,” said Englis Gray.

Many people whom WTOP reporters spoke with saw the appointment of Neal Gorsuch to the Supreme Court as President Trump’s greatest accomplishment thus far.

“I like that he is business-minded instead of always having to follow what politics say. He looks at it a different way,” said Stephanie Fulk, who voted for the president.

“I didn’t vote for him. … So far, I think hes been doing pretty good,” agreed Jessica Riley of Stafford, Virginia.

Elevating Gorsuch came with a price. Senate Majority Leader Mitch McConnell had to change Senate rules to allow Gorsuch and future Supreme Court nominees to be confirmed with just a simple majority vote in the 100-member Senate, instead of 60. Gorsuch was confirmed in a 54-45 vote.

Trump, in an Associated Press interview, promoted Gorsuch’s confirmation.
“I have always heard that the selection and the affirmation of a Supreme Court judge is the biggest thing a president can do,” he said. “Don’t forget, he could be there for 40 years.”

“He’s ruling by executive order right now. I think he tends to forget there’s videotape saying someone shouldn’t do that,” said Sam Chisolm. The Gainesville, Virginia, resident gave the president a grade of D.

“I think that he still hasn’t tried to work to get the American public together. I think he’s still only pandering to his base. He doesn’t realize he’s now the president of the United States and not a certain segment of America,” said Chisolm. He then added that while he didn’t vote for Trump, he’s still his president.

With the recent release of the administration’s tax proposal and backstop on demands that border wall funding be a part of the budget, some voters reacted to the uncertainty of the president’s plans.

“I think he’s gone about the wrong ways for many things he’s trying to propose. Obviously, the wall is important to me. The taxes are a huge mess. Those are two big things that obviously for me mean a lot,” said Javier Castro in Prince William County, Virginia.

The border wall money is fiercely opposed by Democrats, whose votes are needed to pass the governmentwide spending legislation next week. The wall is also unpopular with many Republicans, and GOP negotiators on Capitol Hill were uneasy about the clash over the wall potentially sparking a government shutdown.

“He’s not following through on all of his promises and he’s going too big. You can’t do everything at one time,” said Dale, who did not give his last name. He gave the president a grade of C minus.

“You can’t start a war. You can’t build a wall. There’s not that much money and he’ll never get it done,” Dale said.

The Trump administration told lawmakers Wednesday it will apply economic and diplomatic pressure on North Korea to dismantle its nuclear weapons program, as an extraordinary White House briefing served to tamp down talk of military action against an unpredictable and increasingly dangerous U.S. adversary.

“I would say I like what he’s done stirring up the system. He’s got the Democrats’ attention,” Randy Klein told WTOP’s Kathy Stewart. He’s happy with the basic economic plan Trump has laid out.

“I understand the roadblocks that the Democrats are trying to put up in front of him. That’s what they do. Republicans would do the same thing — but I wish there was a little more cooperation, I really do. Because it’s still the United States,” said Klein, who gave the president a grade of B.