After a two-year push for higher wages, contracted service workers at Reagan National and Dulles International airports are set to get a hefty bump in pay — more than 50 percent higher in some cases.
Listen now to WTOP News WTOP.com | Alexa | Google Home | WTOP App | 103.5 FM

WASHINGTON — After a two-year push for higher wages, contracted service workers at Reagan National and Dulles International airports are set to get a hefty bump in pay — more than 50 percent higher in some cases.

The board of directors for the Metropolitan Washington Airports Authority, which oversees both airports, voted Wednesday to give a raise to around 5,000 employees including baggage handlers, wheelchair attendants, and terminal and cabin cleaners who work with contractors that do business with airlines.

Many of them have been making as little as $7.25 an hour.

“The hardworking contracted employees at our airports deserve to earn a wage that gives them a fair shot at pathways to the middle class,” said D.C. Mayor Muriel Bowser, who praised the airports authority for its decision.

“Millions of passengers from D.C. and beyond rely on these men and women to travel safely, and higher wages will ensure that MWAA can retain the experienced employees who keep our airports safe and sustainable,” she said.

Under the new MWAA policy, airport contractors would be required to pay employees $11.55 starting in January of next year. Wages are set to rise to $12.15 in 2019 and then to $12.75 the following year.

“MWAA has taken a positive step to help ensure that our local airports have a more experienced and stable workforce,” said Rep. Gerry Connolly, D-Va. “A living wage will reduce turnover, improve the quality of service, and help keep our workers and passengers safe.”

The employees have been pushing for a wage increase for two years, walking off the job on strike and delivering multiple petitions to MWAA and their employers.

Although the vote is a win for the workers, wages still will not go up to $15 an hour, which is what they were lobbying for.

“The airports authority has taken a step in the right direction, but workers need $15 per hour to reach the light at the end of a long tunnel of poverty,” said Jaime Contreras, vice president of Service Employees International Union Local 32BJ, which has organized protests with the workers.

“These are people who make sure the airports run smoothly every day,” Contreras said. 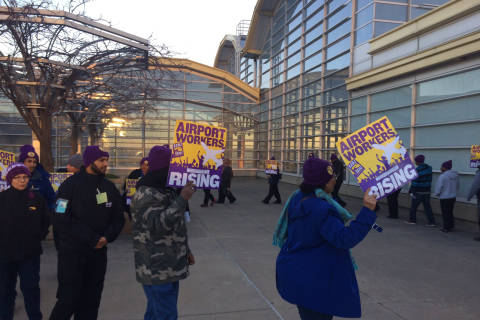 Hundreds of workers go on strike at Reagan National and Dulles