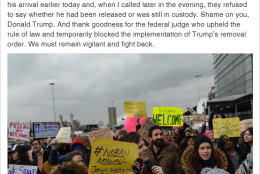 “It is outrageous that a 5 year old boy … was detained for more than 4 hours this evening at Dulles airport,” Van Hollen wrote on social media. “He was held despite the fact that we gave the authorities advance notice of his arrival earlier today and, when I called later in the evening, they refused to say whether he had been released or was still in custody.”

Van Hollen continued: “Shame on you, Donald Trump. And thank goodness for the federal judge who upheld the rule of law and temporarily blocked the implementation of Trump’s removal order.”

Several immigration lawyers have since told WTOP that the boy was released Saturday night with his family.

Trump’s order, issued Friday, also barred green card holders from those Muslim countries from re-entering the United States.  The  order placed a 90-day ban on travel to the U.S. by citizens of Iraq, Syria, Iran, Sudan, Libya, Somalia or Yemen and a 120-day suspension of the U.S. refugee program. Syrians are indefinitely blocked from entry.

But in an appearance Sunday on NBC’s “Meet the Press,” White House Chief of Staff Reince Priebus appeared to contradict what the White House has been saying for the past 48 hours.

“We didn’t overrule the Department of Homeland Security, as far as green card holders moving forward, it doesn’t affect them,” Priebus first said. But when pressed by host Chuck Todd on whether it impacts green card holders, Priebus reversed himself, saying: “Well, of course it does. If you’re traveling back and forth, you’re going to be subjected to further screening.”

Relevant to that is Rep. Barbara Comstock’s statement Sunday morning. The Republican serving Virginia’s 10th District said the move “inexplicably applied to green card holders, people who are legally within our country who have followed the rules.”

“I don’t believe it is constitutional to ban people from our country on the basis of religion. However, I do support … increased vetting based on national security concerns.”

Virginia Sen. Tim Kaine on Saturday also commented on Twitter, “If we turn our backs on widows and orphans fleeing the very evil we despite we do not defeat our enemies, we surrender to them.” Later Sunday on NBC’s “Meet the Press,” the former Democratic vice presidential candidate said it was ironic that the order was issued on Holocaust Remembrance Day.

“Who would help the United States if they knew we would abandon them when they are trying to come here?” he asked.

In a statement prepared Friday, Kaine’s counterpart from Virginia, Mark Warner, said the order “runs counter to our American values.”

“While I have always been open to a pause on our refugee program to ensure appropriate time for intelligence and law enforcement experts to ensure we protect our national security,” he said, “these actions by the president presume the solution before the review is complete.”

Maryland Sen. Ben Cardin, a Democrat, was critical on Twitter, as well. “I call upon @POTUS to rescind his ExecOrder before it does any more damage to our national security or endangers the lives of Americans,” he tweeted. “This betrayal of friends &those who stood w/us will make the US less safe &places our servicemen and servicewomen in even greater danger.”

“I am outraged and disappointed by the actions President Trump has taken to ban travelers from certain Muslim nations and to close our country to families seeking refuge from persecution. This executive order is antithetical to the values that make America great, and it will make our country less safe,” the Democrat said in a prepared statement Saturday.

D.C. congresswoman Eleanor Holmes Norton, who had earlier tweeted that she was “monitoring” the situation, later tweeted, “Court ruled for families and lawyers kept from contact with green card holders and vetted refugees,” adding the hashtag “#NoBanNoWall.”

Rep. Jamie Raskin of Maryland also tweeted the “#NoBanNoWall” hashtag. “Let’s be clear: Trump is tearing apart families with his unconstitutional and racist ban,” he wrote. “This is not what America stands for.”

Maryland Gov. Larry Hogan, a Republican, has not issued a statement regarding the immigration ban and the implications for people traveling to BWI. Dozens of people have criticized the governor’s silence on this issue on his Facebook page.

WTOP has reached out to the governor’s office for a statement.

McAuliffe says refugee ban will ‘breed hatred’ toward US