In 1987, an Amtrak train and a Conrail train collided in Chase, Maryland. The cause of the crash turned out to be an engineer and a brakeman who were high. See photos.
Listen now to WTOP News WTOP.com | Alexa | Google Home | WTOP App | 103.5 FM
(1/5) 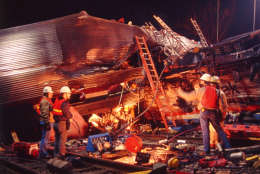 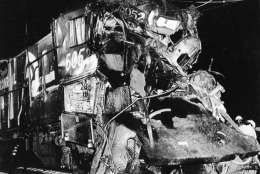 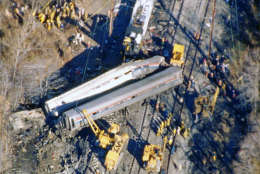 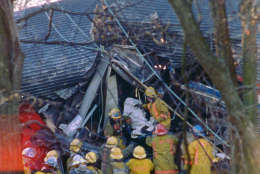 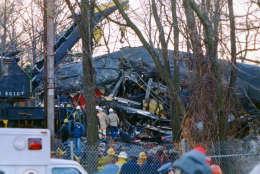 WASHINGTON — Thirty years ago, an Amtrak bound for D.C. from Boston collided with a Conrail train that had crossed into its path in Baltimore County.

Sixteen people were killed in the Chase, Maryland, crash. Another 174 were injured in the Jan. 4, 1987 afternoon crash.

The crash, at the time, was the deadliest in Amtrak history.

The cause of the crash that occurred at 125 mph would be end up being a Conrail train engineer and a Conrail train brakeman who were high. Their three-locomotive train ran a warning signal and despite braking, the Amtrak train “was traveling between 120 and 125 mph and could not be stopped before colliding” with the Contrail train, an NTSB report said.

The National Transportation Safety Board found marijuana and the hallucinogenic drug PCP in the urine and blood of Ricky Gates, the engineer of the Conrail train.

Edward Cromwell, a Conrail brakeman who also had PCP in his urine, would receive immunity for his testimony against Gates.

Gates served nearly two years of a five-year state sentence for manslaughter by locomotive, and two additional years of a three-year federal sentence for lying to investigators.

In 1993, Gates told The Baltimore Sun his addictions of alcohol and marijuana would cost him his family and friends.