The driver of a bus traveling from the Washington area to New York City was videotaped watching TV on his smartphone during the trip up I-95.
Listen now to WTOP News WTOP.com | Alexa | Google Home | WTOP App | 103.5 FM
(1/4) 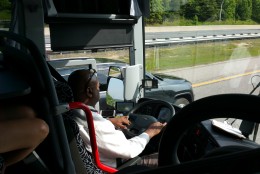 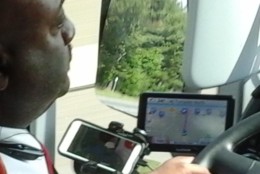 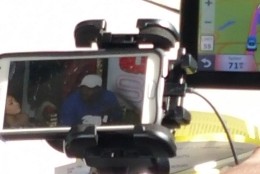 WASHINGTON — Watching TV on a smartphone can pass the time during a long bus trip from the Washington area to New York City, but a local passenger was horrified to realize the driver of his bus was paying attention to the television program when he should have been keeping his eyes on Interstate 95.

A local businessman provided WTOP with video of the driver of his bus watching a program on his phone during a Thursday morning trip from Bethesda, Maryland to New York City.

The Tripper Bus , which left Bethesda at approximately 7 a.m. arrived safely in Manhattan before noon, but the passenger was shaken.

“I was thinking ‘WTF is this guy doing?’ said the passenger, in an email. “Why would he take such a risk? Does he value his life and the lives of the others on this bus?”

From the front passenger seat of the new bus, which had fewer than a dozen passengers on board, the rider recorded the driver’s actions, and forwarded the tape and photos to WTOP.

The driver had mounted a Samsung phone near his left knee, below a tablet containing mapping software.

During the trip up I-95 the video shows the driver repeatedly shifting his eyes from the traffic in front of him toward the TV program.

“I was scared, very scared,” said the passenger. “I couldn’t take my eyes off the road, I couldn’t relax, or sleep, or work.”

The passenger said he was reluctant to confront the driver, in fear of angering him. The passenger asked not to be identified in this story out of fear of retaliation.

The video he provided contains audio from a podcast he was listening to, while videotaping the driver’s actions.

When shown the video by WTOP, the driver’s boss was furious to witness the distracted driving.

“I tell these guys all the time, put the phone down,” said Martin Gunther, owner of Gunther Charters & Hunt Valley Motor Coach . “It’s like they’re addicted to it.”

Gunther said his company owns and operates buses for several low-fare carriers which don’t have their own buses, including Tripper.

Soon after seeing the videotape, Gunther spoke with the driver by phone.

“I talked to him. I said put that phone away, and I’ll talk with you when you get back,” Gunther said.

Online records from the Federal Motor Carrier Safety Administration shows Gunther Charthers, Inc., of Hanover, Maryland, has a satisfactory safety rating, and its drivers perform well-above-average in on-road performance, according to the FMCSA.

“Safety is everything to me. I’m glad nobody was hurt,” said Gunther.

When contacted by WTOP Thursday midday, Gunther said he had hired the driver who was videotaped, and that he was one of his company’s better drivers.

After his day of meetings in New York City, the bus passenger opted for a different, more expensive mode of travel for his return trip.

Regardless, the passenger said he won’t ride Tripper Bus again.