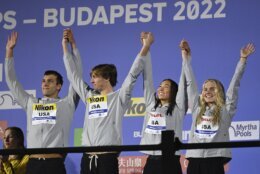 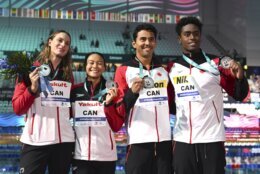 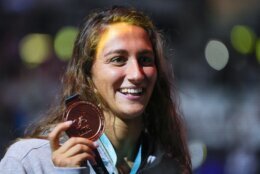 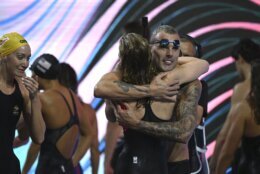 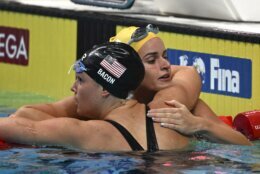 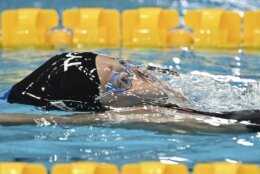 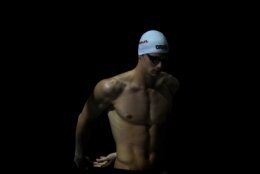 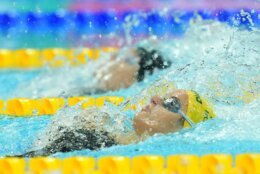 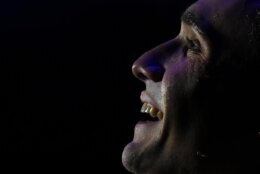 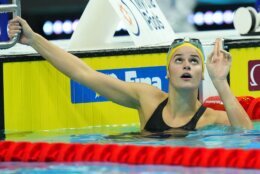 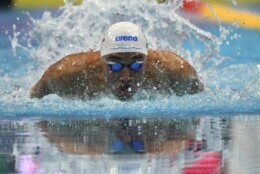 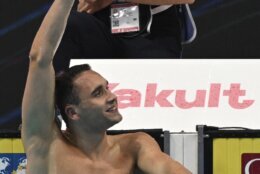 BUDAPEST, Hungary (AP) — Katie Ledecky extended her record haul of medals and Australia set a world record in the mixed 4×100 meters freestyle final at the world swimming championships on Friday.

American star Ledecky won the 800 freestyle final for the fifth time at the worlds to seal her fourth consecutive 400/800/1,500 triple at the event.

She clocked 8 minutes, 8.04 seconds to finish more than 10 seconds ahead of her rivals. Australia’s Kiah Melverton was 10.73 behind in second and Italy’s Simona Quadarella 10.96 behind for third.

It’s Ledecky’s 19th gold at a worlds and her fourth this week including the 4×200 freestyle relay.

Her 22 medals are the most for a female swimmer in world championships history. Only Michael Phelps, who won 26, has more.

Australia’s mixed relay team of Jack Cartwright, Kyle Chalmers, Madison Wilson and Mollie O’Callaghan clocked 3:19.38 in the 4×100 to shave two-hundredths of a second off the record set by the United States at the last worlds in Gwangju, South Korea, in July 2019.

“I don’t think there was any mention or any expectation or even a thought about being able to break that,” Wilson said. “So to do that and see that at the end was just unbelievable and a real surprise for us.”

Canada’s team of Joshua Liendo, Javier Acevedo, Kayla Sanchez and Penny Oleksiak finished 1.23 behind the Australians for silver, and the United States team of Ryan Held, Brooks Curry, Torri Huske and Claire Curzan was third, 1.71 behind.

Canada’s silver was the country’s ninth medal this week, eclipsing the eight it won in Gwangju.

Ben Proud won Britain’s first gold of the championships, clinching the men’s 50 freestyle in 21.32 – 0.09 ahead of American Michael Andrew and 0.25 ahead of France’s Maxime Grousset.

“We’re missing quite a few key players in the pool today,” Proud said, referring to the absences of Caeleb Dressel, Florent Manaudou and Bruno Fratus. “The whole podium from the Olympics last year wasn’t in the final.”

Dressel was due to race but withdrew from the worlds for unspecified reasons on Wednesday.

“It’s not the same without him,” Proud said. “As soon as he was out, that quite changed the dynamics of the competition. A lot of people had a different type of pressure leading in..”

Dressel, the world record holder, was also missing from the 200 butterfly.

Kristóf Milák followed up his win in the 100 butterfly – where he lowered his own world record – by adding the 200. The Hungarian swimmer delighted the home fans as he clinched the title in 50.14 ahead of Japan’s Naoki Mizunuma and Canada’s Josh Liendo.

Milák joined Phelps and South African Chad Le Clos as the only male swimmers to achieve the 100/200 butterfly double at a single worlds.

Sarah Sjöström won her fourth consecutive 50 butterfly title, clocking 24.95 to head off Melanie Henique of France and Yufei Zhang of China for a record-equaling eighth gold medal in butterfly events at a worlds. Phelps has to share his record.

American Torri Huske was sixth, 0.50 behind Sjöström, who claimed her 18th individual medal at the worlds. Only Phelps, with 20, has more.

After five silver medals, Australia’s Kaylee McKeown finally claimed a gold when she edged American Phoebe Bacon by just four-hundredths of a second in the women’s 200 backstroke.

Bacon’s teammate, Rhyan White, was third for her first medal at a worlds.

It was the closest result in this race at a worlds since 1986 when East Germany’s Cornelia Sirch was two-hundredths of a second ahead of American Besty Mitchell. Sirch later suffered health problems that she attributed to her country’s state doping program.