OMAHA, Neb. (AP) — Freshman Josh Pyne had a two-out, two-run single in the top of the 11th inning to spark No. 8 seed Indiana to a 6-4 victory over top-seeded Maryland in an elimination game at the Big Ten Tournament on Saturday.

Indiana (27-31) advances to play No. 2 seed Rutgers in the semifinal nightcap later Saturday. Maryland (41-12) will exit the tourney following its second straight loss after an 11-game win streak.

Peter Serruto started the winning rally when he was hit by Matt Walsh on a 1-2 pitch with one out. Serruto moved to second on a wild pitch before Phillip Glasser struck out looking for the second out. Bobby Whalen was walked intentionally and Samuel Murrison drew an unintentional free pass to load the bases. Will Glock replaced Walsh and surrendered Pyne’s single up the middle on a 0-2 pitch.

Braydon Tucker (2-3) pitched the final six inning to pick up the win. He yielded a two-out single to Luke Shliger in the 11th before striking out Chris Alleyne to end the game. Tucker allowed four hits and two walks, striking out five. Jack Perkins went the first five innings, allowing two runs — one earned — on six hits and a walk. Perkins also struck out five.

Indiana scored a run in the second and third innings to grab a 2-0 lead. Tyler Doanes drove in the first run with a sacrifice fly and Hunter Jessee scored the second on a throwing error by Maryland center fielder Alleyne.

Maryland knotted the score at 2 on RBI singles by Troy Schreffler in the fourth and Alleyne in the fifth.

The Hoosiers went up 3-2 in the top of the sixth when Pyne led off with a double and scored on a one-out double by Matthew Ellis.

The Terrapins answered with two unearned runs off of reliever Ryan Kraft in their half of the sixth to take a 4-3 lead. Matt Shaw led off with a walk and took second on a single by Schreffler. Both runners scored on a throwing error by Kraft on Maxwell Costes’ sacrifice bunt attempt. Cortes advanced to second on the play, but Kraft retired the next three batters to end the threat. 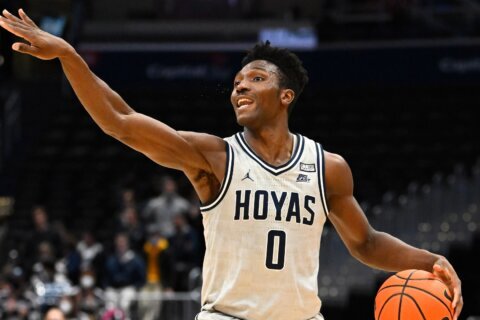